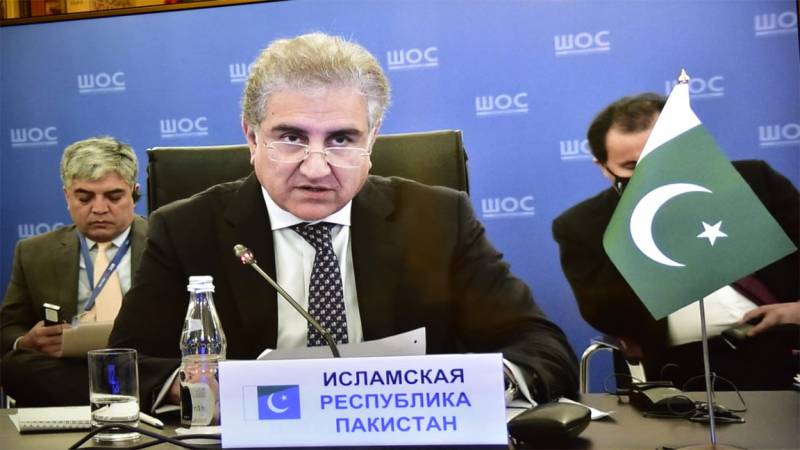 ISLAMABAD – Foreign Minister Shah Mahmood Qureshi has urged the SCO members to work together to address resurgence of fascist ideologies and violent nationalism anywhere in the world especially in the region.

Addressing the SCO Council of Foreign Ministers Meeting in Moscow on Thursday, he said those perpetrating state terrorism against people under illegal occupation in disputed territories must be condemned and held accountable.

He stressed that peaceful resolution of outstanding disputes is a pre requisite for achieving development, economic growth, poverty alleviation and social uplift of the masses. In this context, we strongly emphasize the importance of faithfully implementing UN Security Council Resolutions.

Qureshi said the world must strongly condemn and oppose any unilateral and illegal measures to change the status of disputed territories in violation of UN Security Council Resolutions.

He said we must affirm that extremist as well as xenophobic ideologies, including Islamophobia, have no place in today's world.

Highlighting the importance of peace and stability in Afghanistan, the Foreign Minister said Pakistan has assiduously supported the efforts for a peace and reconciliation process that is Afghan-led and Afghan-owned.

He said the Afghan stakeholders must now seize this historic opportunity and work together to secure an inclusive, broad-based and comprehensive political settlement. It is critical that the Intra-Afghan negotiations commence at the earliest.

The foreign minister said it is also imperative to be cognizant of the role of spoilers within and outside who do not want peace and stability to return to Afghanistan.

He said the return of Afghan refugees to their homeland with dignity and honour should be an essential part of the peace negotiations. We look forward to consultations in the SCO-Afghan Contact Group to further facilitate the Afghan peace and reconciliation process.

He said the SCO should focus on promoting regional connectivity projects. We must not view these projects through a narrow political prism but rather whole-heartedly pursue them for the achievement of sustainable development in the region. He said the CPEC is destined to bring economic prosperity for Pakistan and the region and beyond. In particular, Special Economic Zones under CPEC offer excellent incentives for investment.

Shah Mahmood Qureshi said the regional countries must pool their scientific and technical resources to carry out joint research in diverse fields, foremost with an objective to find an effective vaccine for the COVID-19 virus and make it accessible to all as a global public good.  On its part, he said Pakistan is open to share its experience in combating the pandemic in an effective manner keeping the total cases and fatalities relatively low.

He said the member countries should work together to project SCO as an effective forum for regional development and a new kind of international organization based on the ideals of "Shanghai Spirit".