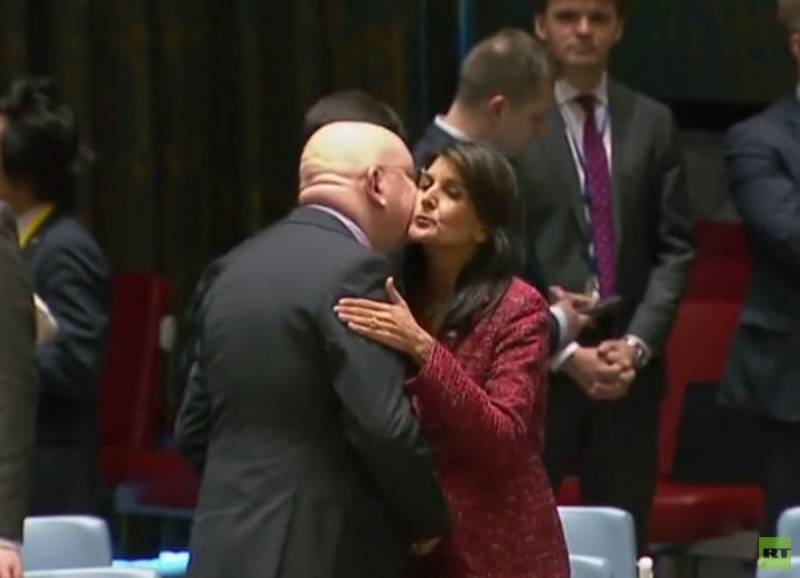 NEW YORK - Minutes before warning that Washington was leading the world towards “sad and serious events” in Syria, Russia’s envoy to the UN exchanged pleasantries and even kisses with US envoy Nikki Haley, a video showed.

Before the UN Security Council failed on Tuesday to pass three separate resolutions on an alleged chemical attack in Eastern Ghouta, Vassily Nebenzia, Russia’s ambassador to the UN, approached his US colleague, shook her hand and kissed her once on each cheek, during what appears to be a brief but amiable exchange between the two diplomats.

Minutes later, Nebenzia accused Washington of trying to block an impartial investigation into the alleged chemical attack in Douma, warning that actions taken by the US and its allies “should worry us, all of us, greatly, because we could find ourselves on the threshold of some very sad and serious events.” For her part, Haley accused Russia of hypocrisy and “playing games.”

"This council, and least of all Russia, should not be calling the shots," Haley said.

Earlier, Haley had vowed that the US will “never be friends” with Russia. Nebenzia fired back on Monday, telling Haley that the United States was “misguided to think you have friends. Your so-called friends are just those who can’t say no to you. This is your only criteria for friendship.”