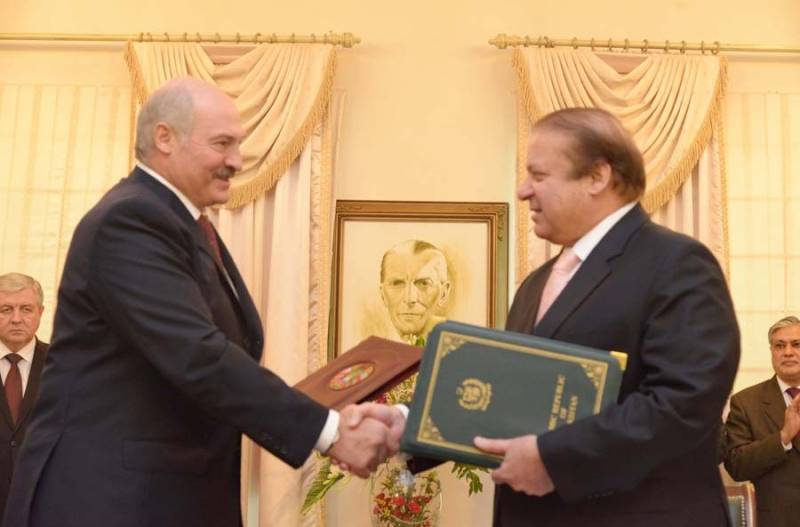 MINSK (APP) - Pakistan and Belarus on Monday inked a number of agreements and memorandums of understanding (MoUs) to strengthen their multifaceted ties particularly in areas of trade, commerce,

The agreements were signed here at the Presidential Palace following a round of delegation level talks and an exclusive meeting of Prime Minister Nawaz Sharif with President Alexander Lukashenko.

The two leaders witnessed the signing. It was the second round of agreements signed between the two countries, the first being done in May at Islamabad, where 20 documents were signed.

The earlier agreements dealt with cooperation in economic areas, military and technical cooperation, interaction in science and technology, information and telecommunications, while Lukashenko and Nawaz Sharif had also signed Islamabad declaration of Belarus-Pakistan partnership.

The signing began with Prime Minister Nawaz Sharif and President Alexander Lukashanko inking a Treaty on Friendship and Cooperation between Pakistan and Belarus. The other document inked was Memorandum of

Cooperation for Translation and Publication of Classical Literary Works of Pakistan and Belarus. It was signed by Pervaiz Rashid, Minister for Information, Broadcasting and National Heritage and Minister of Information of Belarus Mrs. Lilia Ananich.

The MoU for Cooperation in the Field of Literature was inked by Pervaiz Rashid, Minister for Information and Chairman of the Presidium of the National Academy of Sciences Vladimir Gusakov.

The Protocol on First meeting of the Belarus-Pakistan Joint Commission on Trade and Economic Cooperation was inked by Engr Khurram Dastgir, Minister for Commerce and V M Vovk Minister of Industry.

The Agreement on Training in Field of Geology was inked by Syed Tariq Fatemi, Special Assistant to PM on Foreign Affairs and Minister of Natural Resources Andrei Kovhuto

The MoU between Foreign Service Academy Islamabad and Academy of Public Administration Minsk was inked by Syed Tariq Fatemi, Special Assistant to PM on Foreign Affairs and Rector of Academy Marat

The agreement on establishment of sister city relation between Minsk and Islamabad was inked by Chairman CDA Maroof Afzal and Chairman of Minsk City Anrei Shorets.