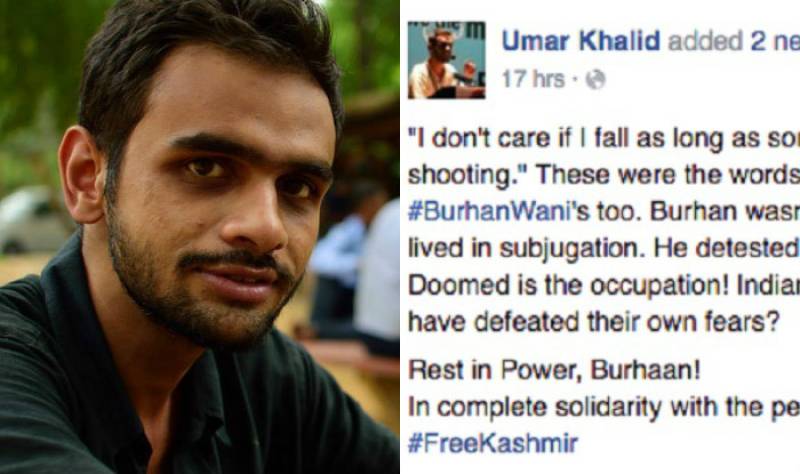 The student activist stirred controversy in India once again after put up a Facebook post in solidarity with Kashmiris, after another surge in clashes between Indian forces and pro-freedom protesters left 200 people dead and hundreds other injured.

Khalid's post has caused many in India to question whether the post constituted a violation of terms set in the 6-month interim bail handed out to him by an Indian court in March.

The outspoken activist had courted controversy on the Kashmir issue earlier this year as well and was briefly jailed by the Indian government on sedition charges after organizing a memorial service for Afzal Guru, a Kashmiri insurgent hanged for his role in the 2001 Indian Parliament attack, at the JNU campus along with pro-Kashmiri freedom activists. After spending close to a month in prison awaiting trial, Khalid was released on bail.

In his post, Khalid celebrated the sacrifice of Burhan Wani, a man who "lived" and "died" free, and seemed to predict that the insurgent leader's death would soon stir an uprising among the people, who had "defeated their own fears".

Burhan Wani, who had become the poster boy of the militant group banned in Indian-occupied Kashmir, was killed in an armed encounter with Indian forces yesterday. While the insurgent leader's slaying was grieved in Pakistan by the public and various officials, including the Prime Minister, it was met with a largely deafening silence within India by both sides of the political spectrum.

However, shortly after Khalid's post became viral, he was forced to delete it, owing to the growing stream of harassment and abuse he started receiving from hardline Indian nationalists and right-wingers.

Khalid himself acknowledged deleting the post, with a bitingly sardonic acceptance of defeat.

In the post, Khalid seems to be trying to point out the brutal costs of supporting or staying silent on the Indian state's repression of Kashmir, and questions whether such complicity will ever "change the ground reality in Kashmir".

While many among the Indian public have questioned Khalid's outcry at the slaying of Burhan Wani, calling for sedition charges to be brought against him once again, the Indian government has yet to respond to the controversy.

Who is Umer Khalid

Umar Khalid, who hails from Maharashtra is the leader of Democratic Student's Union (DSU) an extreme Left group active in JNU.

Even though he was born in a Muslim family, he identifies himself as an atheist.

He is a PhD student at the School of Social Sciences at JNU. He also did his MA and MPhil from JNU and has been doing field work in Jharkhand.