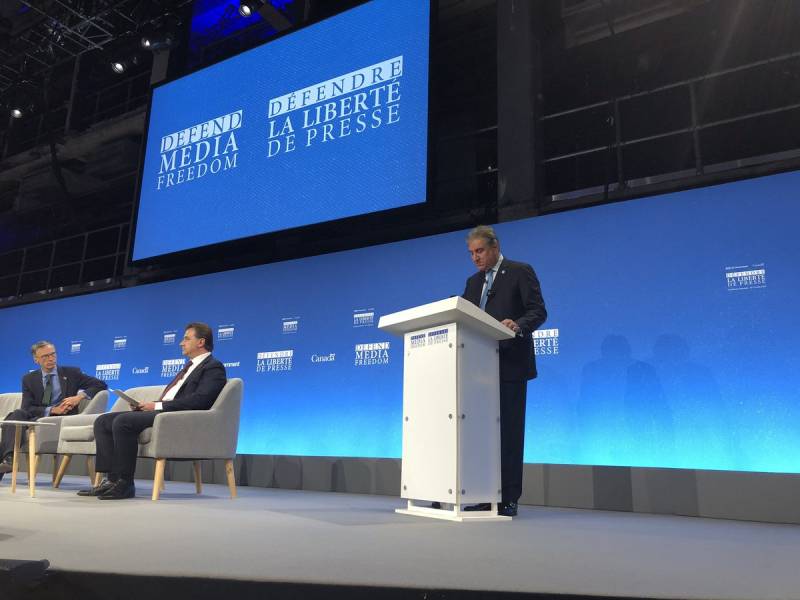 LONDON - Pakistan's Foreign Minister, Shah Mehmood Qureshi was heckled by a far-right anti-Muslim propagandist during one of the conferences in London on Thursday, though he kept cool and responded politely.

Quershi was attending the Defend Media Freedom conference in the British capital when Ezra Levant, started using abusive words and claimed that he was censored.

Sadly our foreign minister Shah Mehmood Qureshi attacked by a social media activist who claims his twitter handle was shut down at #DefendMediaFreedom conference in London. pic.twitter.com/uswrs8ThzV

Levant did not listen to Shah Mehmood Qureshi who was attending the session as a panelist and complained that his Twitter handle was suspended.

Pakistan's Foreign Minister initially addressed Levant and advised him to be cautious in his choice of words; Qureshi also wondered as to how he could be blamed for the suspension of his Twitter handle, however, Levant kept heckling.

'Why did you censor me?' Levant asked to which Qureshi inquired: Did I censore you?

Upon this, Levant replied that he [Qureshi] should not lie.

To this, Qureshi asked as to how he was responsible for such censorship and called out him for double standards.

Though Ezra Levant was termed by some of the netizens as a social media activist, his credentials portray him as an alt-right, anti-Muslim propagandist who peddles his agenda through the commentary website, Rebel Media.