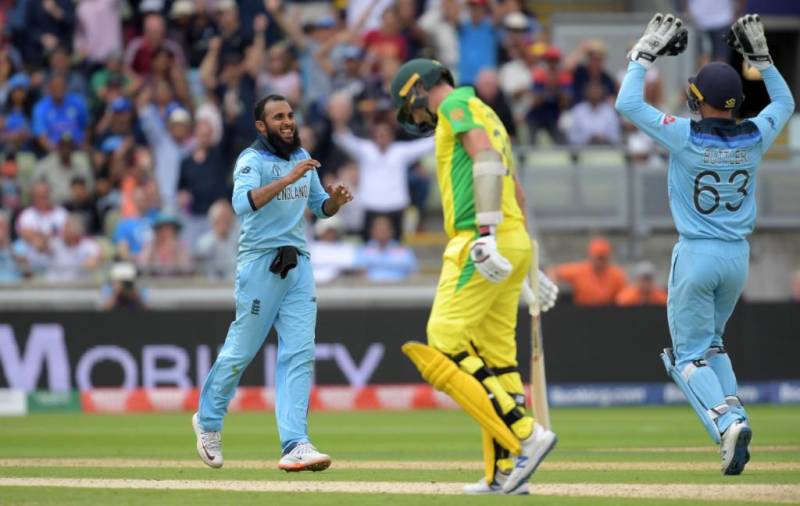 EDGBASTON – England defeated Australia by 8 wickets in the second semi-final of ICC World Cup 2019 at Edgbaston on Thursday.

Batting first, Australian battling line up did not perform well as it posted a target of 224 runs for England in 49 overs; Steve Smith scored 85 runs and somewhat confronted English bowlers.

In response, England clinched the target in 33rd over with 8 wickets in hand; Jason Roy scored 85 runs while Joe Root contributed 49.

England would now confront New Zealand in the final of Cricket World Cup 2019 at Lord’s on Sunday.

A brilliant bowling display from England sees Australia all out for 223! Steve Smith battled hard for the Aussies with his 85 – could that be a match-winning knock?#AUSvENG | #CWC19 pic.twitter.com/REgouHphe5

England, bidding to reach their first final since 1992, made a sensational start against the reigning champions, taking three early wickets to leave Aaron Finch's side in deep trouble.

Prolific opening pair David Warner and Finch, as well as Peter Handscomb, were all back in the pavilion by the seventh over.

Smith and Alex Carey (46) steadied the innings with a fourth-wicket stand of 103 before leg-spinner Adil Rashid struck twice in five balls to leave Australia 118-5.

The dangerous Glenn Maxwell then holed out to England captain Eoin Morgan off the bowling of Jofra Archer for 22 and Pat Cummins was caught by Joe Root to give Rashid another victim.

Legspinner Adil Rashid took 3-54 off his 10 overs, his last wicket being that of Pat Cummins (6), who edged to Joe Root at slip.

That came after Jofra Archer removed Glenn Maxwell for 22 with a slow ball, Eoin Morgan taking a simple catch at cover.

Earlier, Aaron Finch won the toss and chose to bat first against the hosts, led by Eion Morgan.

#AaronFinch has won the toss and elected to bat at Edgbaston.

Australia have never lost any of their seven previous World Cup semi-finals -- although they did tie with South Africa at Edgbaston 20 years ago before advancing into the final thanks to their superior net run-rate from the preceding 'Super Six' stage.

England had won 10 of their last 11 ODIs against Australia prior to the World Cup.

The winners of the match in Birmingham will face New Zealand, who shocked mighty India at Old Trafford, in Sunday's final at Lord's.

MANCHESTER - New Zealand beat India by 18 runs to reach the final of ICC World Cup 2019 on Wednesday. India were ...