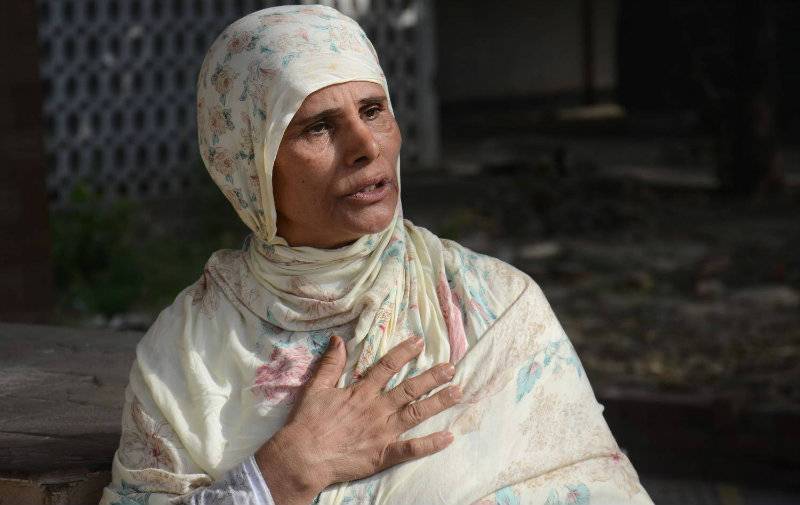 LAHORE (Staff Report) - A woman who burned alive her 17-year old daughter for marrying against family consent has confessed to the heinous crime, while seeking forgiveness from the Creator.

“I don’t know what occurred to me that I killed my own daughter,” Perveen Rafiq, the mother of Zeenat Rafiq, told Daily Pakistan in an interview on Saturday.

“I (alone) seek death for killing my own child, as there is no purpose of my life now,” said Perveen, who claims nobody else assisted her in the murder of Zeenat.

“The poor girl kept on begging for mercy when I strangled her with my dupatta (shawl). My daughter-in-law (who was present in the house at that time) also resisted and asked me to let her go,” she added, while detailing the brutal murder, before fainting inside lock-up.

Zeenat had earlier married a man named Hassan seven days prior to her painful death.

Soon after, her family lured her back home with the promise of holding a traditional wedding reception for the newlyweds. Instead, the family allegedly burned her alive.

Hassan Khan, husband of deceased Zeenat Rafiq, who is a motorcycle mechanic by profession, filed a complaint against the victim’s family at the Factory area police station.

In his statement, Hassan contended that he contracted a love marriage with the victim on May 29 through a local court. Following the marriage, the victim’s cousin Mushtaq Ahmad visited his house and asked her to go back home so the marriage ceremony could be held properly, Hassan told the police.

On the day of incident, he got information that his in-laws were subjecting his wife to torture. He rushed there along with his father and witnessed that his brother in law Mushtaq and mother-in-law were setting his wife ablaze. As a result, she received multiple burns and died on the spot. Police were then called to the scene to collect evidence.

An anti-terrorism court on Friday awarded a five-day physical remand to the woman and her son to police for burning alive Zeenat ‘in order to reclaim honour’.

Factory area police produced Perveen Rafiq before the court. The police sought 14-day physical remand for investigation. However, the court granted five-day physical remand of both accused to the police. A third accused person Anees, brother of the victim girl, has also been arrested.

All accused will be presented in court on next hearing, June 15.

Urging the federal government to detail the steps it was taking to prevent such violence, Senator Sherry Rehman told the Senate: "Women continue to face violence in the most atrocious form despite the prevalence of legislation against such acts."

However, only a day after the merciless murder, a security guard shot dead his daughter, her husband and brother-in-law in a similar case of ‘honor’ killing.

Twenty-year-old Saba Karamat, her 24-year-old husband Karamat Ali, and his 48-year-old brother Ikram Ali were gunned down by the father of the woman on Friday morning.

Rights campaigners say that a family turning against their own child "shows that there is something flawed in law and society".

"Anybody, whether father, mother, can do it because they have the satisfaction that they can get away with it," said Hina Gilani, a human rights activist in Lahore.

Earlier this year, Prime Minister Nawaz Sharif vowed to eradicate the "evil" of honor killings after a documentary highlighting the issue won an Oscar in February. However, no fresh legislation has been tabled since then.

Last week 19-year-old Maria Sadaqat was tortured then burned alive for refusing a marriage proposal from a school principal's son in Murree.

Honor killings of women by relatives are common in the country where civil society activists have repeatedly called for harsher punishment for such crimes. The Parliament passed the Anti-Honour Killing Laws (Amendment) Bill 2014 in March 2016, which binds the law enforcing agencies to treat honor killing as heinous crime and ensure the state would act against the killers in case they are pardoned by the relatives of the victim.

According to the Human Rights Commission of Pakistan, at least 1276 incidents of honour killings were reported in the country from Feb 2014 to Feb 2016.