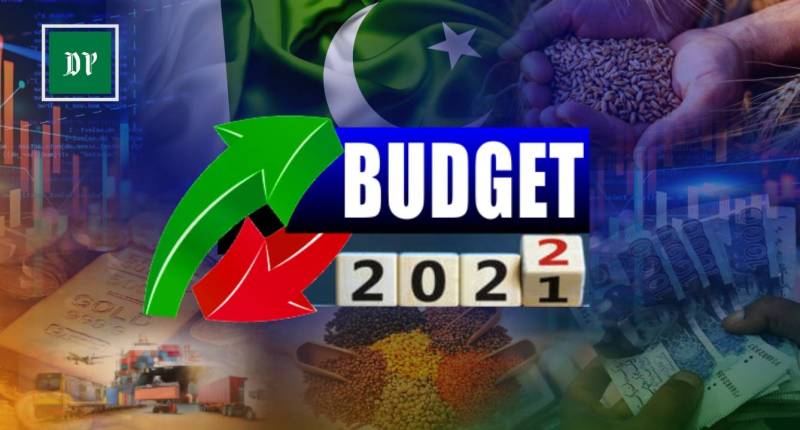 ISLAMABAD – Finance Minister Shaukat Tarin on Friday presented the Federal Budget 2021-22 amid ruckus by opposition inside and protests by the employees outside the lower house of Parliament.

Tarin – who unveiled the Pakistan Economic Survey 2020-21 a day earlier – began his speech soon after the National Assembly session started at 4:00pm.

The federal government has set the GDP target at 4.8pc for next fiscal year.

Rs1370 billion have been earmarked for defence expenditure

Around Rs14.327 billion has been earmarked for various ongoing and new projects of climate change division aimed at enhancing countries resilience against environmental degradation with maximum funding for its flagship project of Ten Billion Tree Tsunami Plantation (TBTTP).

Salaries & Pensions: Minimum wage is being increased to Rs20,000 while federal employees will be provided 10pc ad hoc relief. A 10pc increase is being made in all pensions.

The budget envisages allocation of 900 billion rupees for the federal Public Sector Development Program (PSDP), which is thirty eight percent higher than the previous year.

According to the annual plan, an amount of 469 billion rupees, which is fifty two percent of total PSDP, has been allocated for projects aiming at modernizing infrastructure for accelerating growth. An amount of 228,767 million rupees has been earmarked for energy sector projects for the next fiscal year. By June next year, an additional 5981 megawatts of electricity is expected to be plugged into the system, including 1536 megawatts from renewable sources.

To boost industrial development, electricity and gas supply schemes for Special Economic Zones under CPEC are expected to be completed by June next year.

In order to attain one percent additional afforestation during the next fiscal year, the government has allocated 14,000 million funds to ensure efficient implementation of Ten Billion Tree Tsunami Program-Phase 1.

An amount of 302 billion rupees, which is seventy four percent higher than the PSDP 2020-21, has been earmarked for the development program of the transport and logistics. The concessional financing agreement for landmark ML-1 project of Pakistan Railways is expected to be finalized in the first quarter of next financial year and subsequently arrangements will be made for its groundbreaking.

The Ministry of National Health Services has proposed forty two new schemes for financing out of the next year's PSDP. Some important initiatives include improving emergency and response services for COVID-19 and other transmittable diseases.

Funds to the tune of 1899.86 million rupees have been allocated in the PSDP for the Ministry of Information and Broadcasting and 125.93 million rupees for the National Heritage and Culture Division.

In order to promote balanced regional development, an amount of 160 billion rupees, which is eighteen percent of the PSDP, has been kept aside for projects aiming at fostering harmony in the federation.

The government has planned to invest one hundred billion rupees during the next fiscal year in Azad Kashmir and Gilgit Baltistan and for the merged districts in Khyber Pakhtunkhwa.

The CPEC planned activities during the next fiscal year include continuing work on four Special Economic Zones whilst work will commence on the remaining twenty-three of the twenty seven projects identified for poverty alleviation, health, education, vocational training, agriculture and water supply.

ISLAMABAD – The federal cabinet on Friday approved 10 percent increase in the salaries and pension of government ...

Earlier today, the federal cabinet met in Islamabad with Prime Minister Imran Khan in the chair to discuss and approve the federal budget proposals.

This is the third budget presented by PTI government, with an estimated outlay of around Rs8.487 trillion.