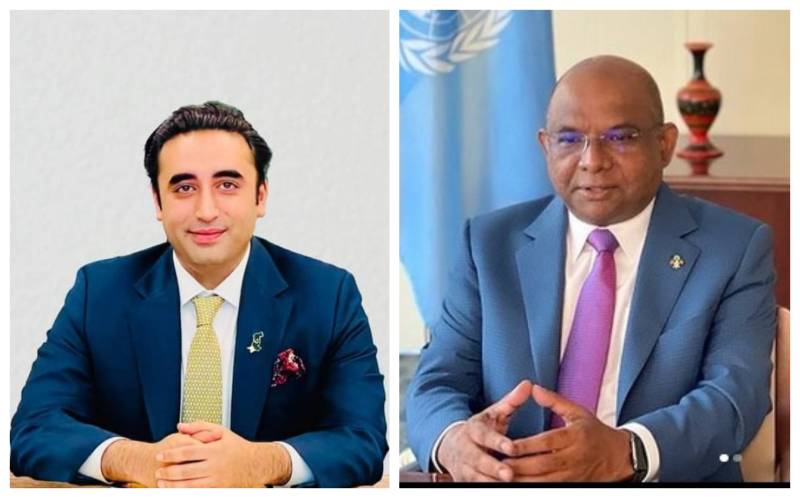 ISLAMABAD – Foreign Minister Bilawal Bhutto Zardari apprised the President of UN General Assembly Abdulla Shahid, of the blasphemous remarks made by two senior officials of India's ruling party BJP, against the Holy Prophet Muhammad (Peace Be Upon Him).

In a telephonic conversation on Friday, the foreign minister regretted that such wilful and deliberate provocation had deeply hurt the sentiments of billions of Muslims around the world.

He urged the President of UN General Assembly to take cognizance of this abhorrent development amidst growing hate speech and rising Islamophobia in India.

Had useful discussion with PGA HE Abdulla Shahid concerning the derogatory remarks by BJP officials against Prophet Muhammad PBUH. Underscored imp role of UN for constructive dialogue and collective efforts to combat hate speech and Islamophobia.

Referring to the muted response of the Indian leadership on the incident, the Foreign Minister noted that silence could be taken as complicity, and could lead to further incitement to violence, communal discord and hate incidents.

Noting the UN's positions on hate speech and Islamophobia, the Foreign Minister expected that the forum of the United Nations would be utilized for constructive debate among member states, also with a view to redressing this issue that has caused such pain and resentment among the Muslims.

JEDDAH – Muslim countries and institutions have condemned the derogatory remarks made by a top official of ...