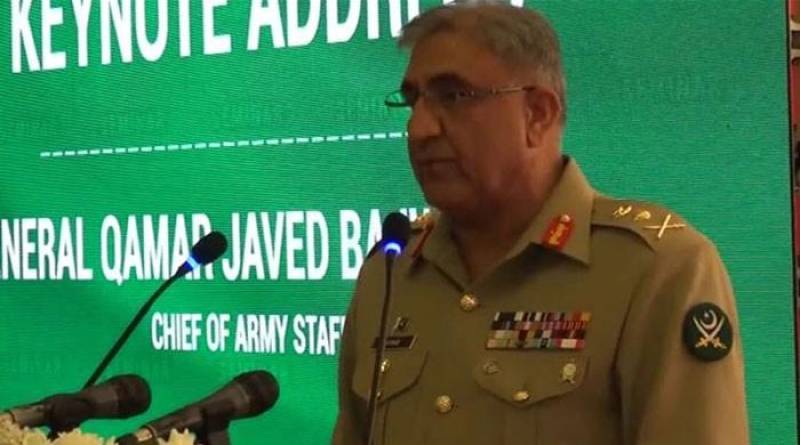 KARACHI – The Army Chief General Qamar Javed Bajwa says Pakistan Army has much-improved security situation on the internal front and the challenges to the state's writ have been defeated.

He was addressing a seminar on "Interplay of Economy and Security" in Karachi Wednesday under the arrangement of Inter-Services Public Relations (ISPR).

The army chief stressed that Pakistan needs a comprehensive effort to pursue the National Action Plan (NAP) and remove vulnerabilities well before they turn into threats.

“Many of the planned measures, if implemented timely, will contribute directly to the economic and even political stability of the country. Police and judicial reforms are obvious examples,” he said.

“Madrassah reforms are also vital. We cannot afford to leave a large segment of our youth with limited options – Madrassahs must enable their students to become useful members of the society who are not left behind in any field of life,” he added.

Gen Bajwa said the external front remains in a flux, due to a belligerent India and unstable Afghanistan on either due to which the region remains captive due to historical baggage and negative competition.

However, he said that Pakistan is making a deliberate and concerted effort to pacify the western border through a multitude of diplomatic, military and economic initiatives, and the boost to the human security provided in FATA and surrounding areas which can be termed as the best example of a holistic approach to security.

“We have also expressed and demonstrated our genuine desire to have normal and peaceful relations with India, however, it takes two to tango,” he maintained.

The army chief said that due to the dedication and sustained hard work of the army and other Law-enforcement agencies, the improvements in security environment have started to pay off.

This is evident from the mega-events in the country in the fields of sports and culture, peaceful Muharram validated by the Bohri community selecting Karachi for the annual gathering.

The army chief expressed concern over the economic situation and the mixed indicators. “Growth has picked up but the debts are sky high. Infrastructure and energy have improved considerably but the current account balance is not in our favour. Our tax to GDP ratio is abysmally low and this needs to change if we are to break the begging bowl,” he said.

He said that it is high time to place economic growth and sustainability at the highest priority which also remains the highest concern even during National Security Council (NSC) meetings.

Gen Bajwa said that nothing exemplifies the link between economy and security better than the city of Karachi, the economic capital of Pakistan, which generates a significant part of the revenue.

“When our enemies want to choke Pakistan, they try to destabilise Karachi because when Karachi bleeds, Pakistan bleeds,” he said. “It is because of this sensitivity, that peace in Karachi has been our top priority. We have worked very hard to restore peace and now hope that economic activity would return at a fast pace.”

Gen Bajwa said the relationship between security and economy is intricate, and therefore solutions are more complex.

“Pakistan is a strategically challenged state. External actors are attempting to assert control and dictate our security priorities that have strong linkages with our economic future,” he said.

“The centrepiece of this effort is China Pakistan Economic Corridor (CPEC),” he said which is a complete development platform that has the potential to act as a powerful springboard development in the entire region.

Karachi will remain “safe and sound”

He stressed that nations cannot rise together into enduring peace and socio-economic development until the current environment of mutual distrust is eliminated. “Peace and stability are in the interest of all and we must strive for it.”

Gen Bajwa said that Pakistan is capable of creating sufficient fiscal space to address underlying structural problems through tax reforms, documenting economy, diversifying the export base, and encouraging savings to finance a level of investment that could sustain growth rate higher than the rise of population.

“In today’s world, security does not come cheap. It is dependent upon economic prowess,” he said adding that the army has done its part on the security front, now it’s up to others to turn the economy around.

He assured that Karachi will remain safe and sound.

“Security and economy are interlinked,” he said adding all nations today are reviewing the old dilemma of “Guns versus Butter”, that is how to achieve a balance between economic viability and national security.

However, he said countries like Pakistan never had the luxury of such a review as it lives in one of the most volatile regions of the world, dealing with multiple during the last four decades.

Therefore, Pakistan must be able to evolve on the way and continuously ensure a viable balance between economy and security.

The chief of army staff, once again reiterating that external factors are trying to dictate security priorities, said strong links exist between security and the economic future of the country exist.

"The centrepiece of this effort is China-Pakistan Economic Corridor (CPEC)."

Referring to CPEC as a powerful springboard for shared development in the CASA (Central Asia-South Asia) region, Bajwa said the project is a complete development platform.

"This is the future of our people, a vital national interest on which we will never compromise, regardless of the loudness of opposing voices," the army chief said while conveying a strong message.

He also referred to CPEC as an example of regional and a break from politics of confrontation.

"I sincerely believe that the region will sink or sail together – that is how it has played out across the world," said the army chief and added that he wants to convey to Pakistan's neighbours in the east and west that out destinies are next inextricably linked.

Bajwa, however, said that until the current environment of mutual distrust is eliminated, Pakistan cannot possibly imagine enduring peace and socio-economic development in the region.