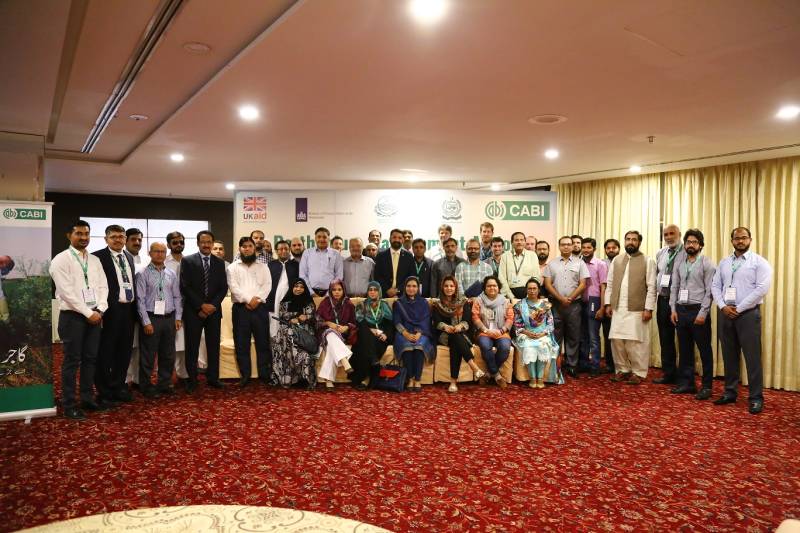 ISLAMABAD - The Centre for Agriculture and Biosciences International (CABI) has launched a comprehensive action plan aimed at combatting the scourge of Parthenium, a highly invasive species of weed, prevalent and spreading in Pakistan.

CABI, which works to help farmers lose less of what they grow to plant health problems, unveiled its Weed Management Action Plan at a two-day workshop held in the federal capital on October 8-9 2018.

The program was sponsored by the UK’s Department for International Development (DFID). The workshop’s main objectives were to share experiences and information on Parthenium weed’s presence and impacts in Pakistan and draft an initial comprehensive action plan in the short, medium and long-term.

The action plan comprises of three stages: research, development and communication. It will emphasise on strengthening links between stakeholders to set priorities, list key activities and institutions involved.

It will focus on developing a Weed Management Decision Guide (WMDG) in order to utilise best practices for early detection, prevention and control. The weed can be controlled by chemicals but they are toxic for the environment. This is where CABI comes in to assist farmers by providing them with an integrated and sustainable framework to address the issue of the invasive weed. These not only include potential control methods but also outreach programmes to ensure farmers, as well as the public, are aware of this destructive and dangerous weed.

Each year, invasive species approximately cost the global economy more than US$1.4 trillion. The burden of invasive weeds is heavily bared by the most vulnerable and poorest. In Southeast Asia, every year, invasive species cost at least US$33 billion, reducing the total GDP by 5%. It is one of CABI’s objectives to protect and restore the agriculture sector, improve health and refurbish natural ecosystems.

Eventually, this will be achieved through the UK Department for International Development (DFID) and Directorate-General for International Cooperation (DGIS)-funded Action on Invasives initiative that aims to help improve the livelihoods of approximately 50 million poor rural households, affected by invasive species in Asia and Africa.

Parthenium manipulates the ecology of fields, affects the yield of crops, and invades forests through its aggressive nature and allelopathy (hindering development of different plants). It even causes serious threats to surrounding livestock and has the capability to cause rigorous allergies among humans who regularly interact with the weed. In India, Parthenium has resulted in yield losses of up to 40% in various crops. In terms of pasture production, this noxious weed has been found to reduce livestock carrying capacities by 90%. And at a previous workshop held by CABI, Dr Asad Shabbir, assistant professor in the department of Botany at the University of Punjab, predicted Pakistan to be extensively hit.

Known commonly as ‘Gajar booti’, Parthenium looks very beautiful nestled within its white flowers and is often used locally on daily occasions in bouquets or event decorations. Most people remain oblivious to the health hazards posed by this noxious weed. Its seeds spread through the air and can cause asthma, eye irritation, throat infections, and eczema. It has also been known to cause allergies and digestive problems within livestock and other animal species, as well as humans.

Commenting on this occasion, Dr Babar Bajwa, Regional Director of CABI CWA Pakistan, said, “Parthenium is a deadly weed that destroys crops and is also harmful to one’s health. Along with farmers, it is essential that the general public be aware of the presence of this silent enemy living amongst them. We are confident that the CABI Action Plan to combat Parthenium will take great strides in helping prevent the growth and spreading of this quiet killer.”