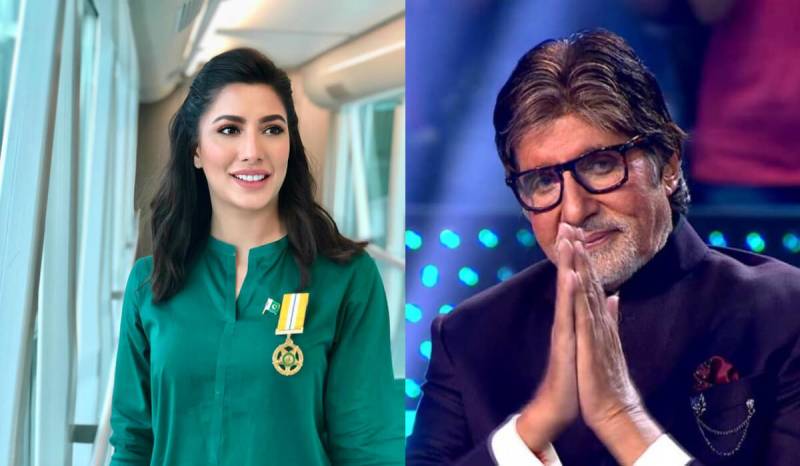 KARACHI - Pakistani famed star Mehwish Hayat has expressed her views over the news of Amitabh Bachchan’s decision to exit a project in which he was to play the character of a Pakistani in a bid to spread the message of peace between the arch-rivals India and Pakistan.

The ties between the nuclear rivals have deteriorated after the Pulwama incident in February which almost brought both neighbors to the brink of war.

As a result of it, India banned Pakistani artists from working in Bollywood and Indian artists were found on the forefront in promoting the nationalist agenda of BJP, cheering war and speaking against peace.

While most of the Pakistani artists remained silent after this news, Mehwish Hayat has responded to the matter on a social networking site.

‘If true, this is very disappointing. Movies have the power to build bridges especially when tensions are high. I guess that in the end nationalism trumps everything I hope that we can also take heed before we gush about all things Bollywood in the future,’ stated the Load-Wedding movie star.

If true, this is very disappointing. Movies have the power to build bridges especially when tensions are high. I guess that in the end nationalism trumps everything - I hope that we can also take heed before we gush about all things Bollywood in future.https://t.co/XqYQZjN53d

Let's go through some of the reactions to Hayat's post:

Do you see any of yr movies coming up?I suggest you to form a task force with actors&other stakeholders to induce enterpreneurs to produce good movies otherwise cinema owners have no choice but to persist with Indian movies.Movies create so many jobs, it is wonderful. Do if U can

He is true indian and nationalist. He is not like our singers who desperate to go india .

Sounds about right..he is AMITABH!..he does not need the controversy..

It seems like Big B had only taken the decision to avoid criticism by his Indian fans and followers and also to stay away from the mess and controversy. Artists all the world should help in promoting peace, love, and friendship.

We hope you too agree to us on this. Let us know in the comments below.