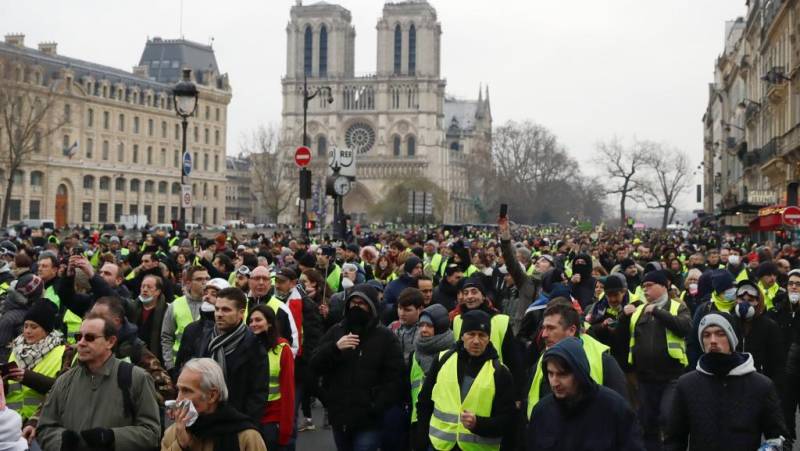 PARIS – France braced for a fresh round of "yellow vest" protests across the country on Saturday, with the authorities vowing zero tolerance for violence after weekly scenes of rioting and vandalism in Paris and other cities over the past two months.

APP reported that officials have warned they expect this weekend's anti-government demonstrations to be bigger and more violent than a week ago, as a movement which had shown signs of fatigue appeared to gain new momentum.

Armoured vehicles and 5,000 officers will be deployed in Paris, where images of burning cars, smashed shops and daylong clashes between protesters and police have made global headlines since November.

"Blue-chip companies, the media, are all in Paris, we'll be more visible," Arnaud, a 48-year-old yellow vest organiser for the Seine-et-Marne region near the capital, told AFP.

Others have called on protesters to converge on the central city of Bourges, which could potentially attract more people from cities farther from Paris.

"I hope that in a city where there's been no incidents since the start of the movement, the mobilisation will be strong and peaceful," one of the organisers said, asking for anonymity.

But Bourges city officials weren't taking any chances, outlawing all gatherings in the historic city centre, removing parking metres, benches and other urban furniture, and closing public buildings and gardens.

Mayor Pascal Blanc told AFP that residents were "worried," with banks and other businesses boarding up windows.

Nationwide some 80,000 security forces will be on hand.