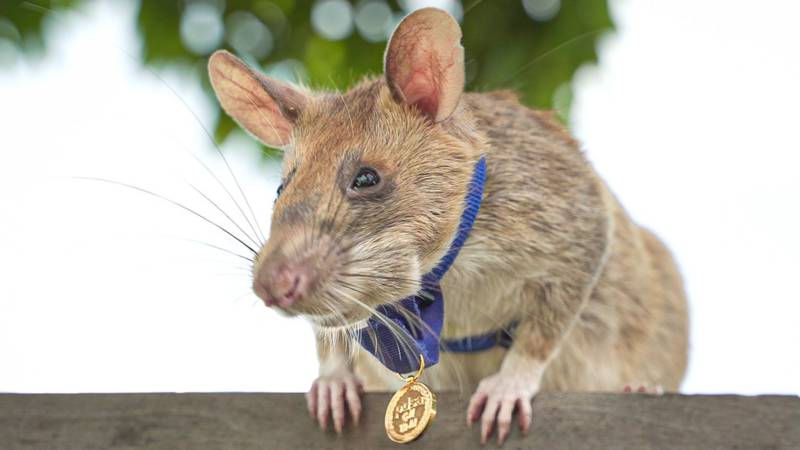 PHNOM PENH – A giant African rat named Magawa, who won a medal for life-saving bravery for sniffing out a hundred landmines in Cambodia, has died at the age of 8.

Magawa’s career spanned over half a decade in which he sniffed out a hundred landmines and dozens more unexploded munitions in the Southeast Asian nation.

The famed rat, who was heralded as a hero and was awarded a gold medal for his heroism in 2020, had cleared more than 225,000 square metres of land. The famed landmine-hunting rodent was retired from his job of spotting landmines in June last year.

In this video, Magawa the hero rat shows how he sniffs out bombs

The Cambodian rodent was the first rat to receive a medal from British veterinary charity PDSA in the 77 years of the awards, joining an illustrious band of brave canines, felines, and even a pigeon.

APOPO, an NGO that trains African rats to detect landmines and tuberculosis, said the eight-year-old passed away ‘peacefully’ this weekend. A statement issued by the group said “All of us at Apopo is feeling the loss of Magawa and we are grateful for the incredible work he’s done”.

Magawa was reportedly in good shape and spent most of last week playing with his usual interest but he started to slow down, napping more and showing less interest in food over the weekend.

The Belgian organisation trained Magawa to detect the chemical compounds in explosives by rewarding him with treats. During his service, he used to alert deminers by scratching the earth after smelling the field.

'Pose' star Mj Rodriguez has become the first black transgender woman in history to win a Golden Globe Award. The ...

Reports claimed that the smart rodent never set off a landmine by walking over it. He was able to clear an area the size of a tennis court in 30 minutes, normally that would take four days using a conventional metal detector.

Cambodia is one of the world’s most heavily mined countries, with more than 1,000sq km of land still uncleared from explosives. Millions of landmines were laid in the country during the three-decade-long civil war which ended in 1998.