"3 men made a secret video of me changing my clothes": Girl's post on social media, sparking public outrage 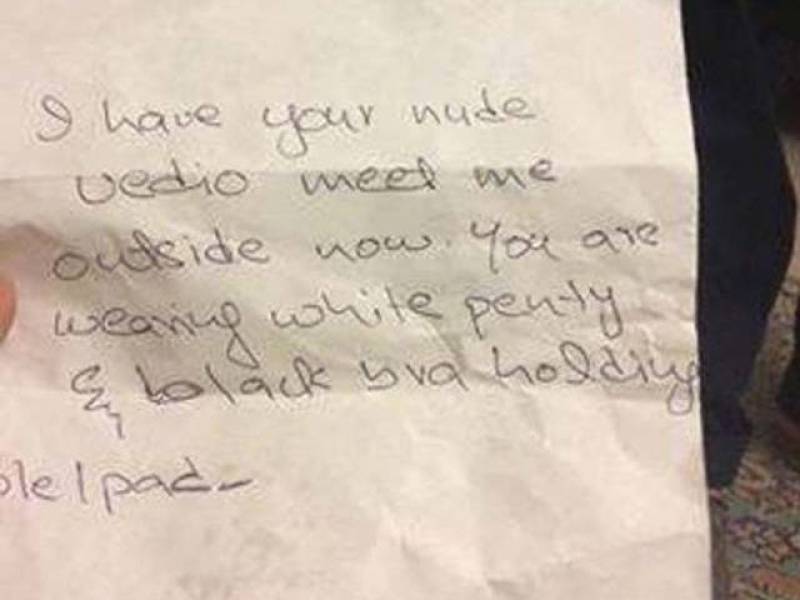 KARACHI (Web Desk) - A young girl has stirred public outcry on social media after she shared her experience of being blackmailed by a group of men who secretly recorded her on camera while changing clothes inside her own house.

A Facebook post and screenshots surfaced on the internet on Saturday night, put up by a girl from Karachi who opened up about being harassed by three boys who lived in her society, Askari 1 Apartments.

According to a post shared by Girls at Dhabas, a Facebook page which seeks to reclaim public space for women, the unnamed woman was harassed by three boys who were able to film her while she was changing clothes in her room.

About the incident, she wrote “Three guys in their early 20s were able to open my window and make videos of me changing my clothes. They slipped this note in and asked me to read it. I got pissed at their audacity because at first I thought it was them slipping their cell phone numbers to me, but upon their insistence, I opened and read this note. Once I had they DEMANDED that I come outside right now and listen to what they had to say to me.”

Upon her refusal to come out, the boys threatened her saying “baahir nikal, tujhe batatay hain (Get out of your house, we will teach you a lesson)”. The girl went out of the house with her father, however the boys had run away before the girl and her father could reach them.

Following the incident, the girl faced absurd questions on social media, which she shared in her post: “The questions that followed were basically polite jabs at my character: why was her window open? Are you sure she’s not involved with one of the boys? As if ANY of that matters when somebody took videos of me in MY ROOM, without MY consent and then had the audacity to try and blackmail me without ANY fear of consequences because they knew they could get away scot free and they have.”

Urging the public to not let this happen with any other woman, she said: “The men doing these things are your sons, your brothers, your fathers and yourself. STOP ENABLING THIS TO HAPPEN TO THE WOMEN.”

The post was shared some 21 hours before this story was filed and has received around 2,200 shares and hundreds of comments.