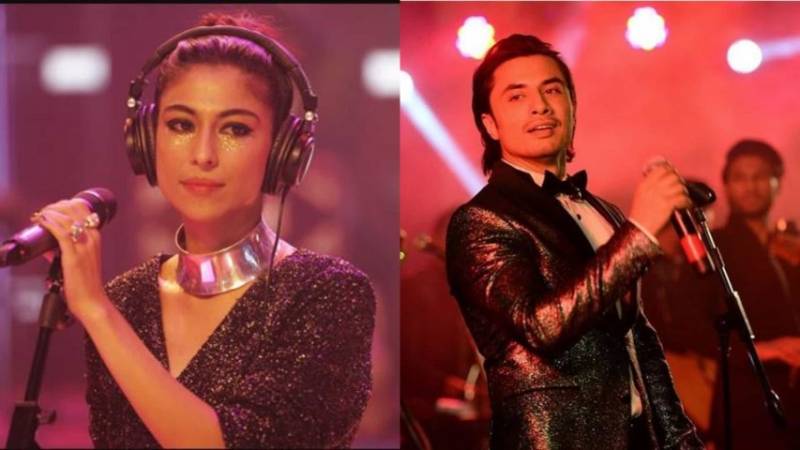 LAHORE - The counsels of Pakistani singer Meesha Shafi have finally replied to a legal notice sent by Ali Zafar over sexual harassment allegations against him.

The counsel replied to Ali Zafar's notice saying: “At the very outset, we categorically deny all allegations, assertions and/or insinuation expressly or implicitly made in your notice against our client, all of which are legally and factually incorrect."

Shafi’s legal team, which comprises Hina Jillani, Saqib Jillani, Nighat Dad and Muhammad Ahmad Pansota, further wrote, “Your client is urged to withdraw the unlawful and false notice and issue an apology immediately for the wrongs he has committed against women.”

The reply comes in response to a legal notice sent by Zafar’s counsel asking the singer-cum-actor to delete her tweet alleging harassment and issue an apology on Twitter, failing which he will file a Rs1 billion defamation case against her.

In response to the notice, Shafi's legal team said, “Your assertion that our client had mala fide motives actually belittles and undermines the #MeToo campaign which has helped hundreds of women all over the world share their harrowing experiences of sexual harassment and hold their abusers to some form of accountability. Our client's decision to share her experience publicly, knowing full well the risks she was exposing her family and herself to, is extremely brave and path-breaking.”

Listing down Meesha’s achievements so far and her family background, the reply added, “Most of all, our client is a happy wife of a wonderful husband and a proud mother of two beautiful children.”

The reply continued, “Your client's actions constitute sexual harassment as defined in section 2(h) of the Protection against Harassment of Women at the Workplace Act 2010, which defines harassment to mean "any unwelcome sexual advance, request for sexual favors or other verbal or written communication of physical conduct of a sexual nature or sexually demeaning attitudes, causing interference with work performance or creating an intimidating, hostile or offensive work environment_ or the attempt to punish the complainant for refusal to comply to such a request or is made a condition for employment. Your client can also be held liable under the Pakistan Penal Code, 1860 ("PPC").”

Rejecting Zafar’s tweet refuting Shafi’s allegations against him, the reply read, “That our client denies and refutes in the strongest possible terms the allegation that she has defamed your client. In this regard, your client’s tweet is rejected being an attempt to conceal and hide his predatory behavior. Your assertion that our client posted the tweet claiming sexual harassment by your client as part of some grand scheme due to jealousy is patently false and unfounded. Our client has absolutely no mala fide intention, ulterior motives or any other agenda against your client other than addressing his unlawful actions. Your client is being condemned and exposed for what he has done against many women including our client. Our client is an accomplished and successful artist who enjoys a huge fan following. She and her family are known to support women rights and human rights and progressive values. She has nothing to gain out of falsely accusing your client. In fact, after opening up about the sexual harassment which our client has faced, it is our client who has been subjected to the worst form of slander, stereotyping, character assassination and vitriol in electronic. print and social media instigated by your client.”

“The statements of our client are true and she has every right to expose these publicly in the interest of her own protection, right to dignity and freedom to pursue her career and public life and to fulfill her professional responsibilities in an enabling environment without fear and anxiety. It is pertinent to mention here that many women have spontaneously come forward and reported similar incidents against your client at the risk of being slandered, bullied and threatened,” it further noted.

In its last point, the reply stated, “That a vicious campaign comprising rumours, allegations, threats and slander against our client has been initiated on behalf of your client, which has not only targeted our client but her family and her two young children, forcing her to deactivate all her social media accounts except Twitter. Please note that our client reserves the right to initiate appropriate civil and criminal proceedings against Your client and others who have resorted to libel, slander and other harassment against our client.”

'Meesha-Ali Scandal' has been going on since a month and latest of the case is that Ali has sent the singer a legal notice. Let's hope the matter resolves soon.