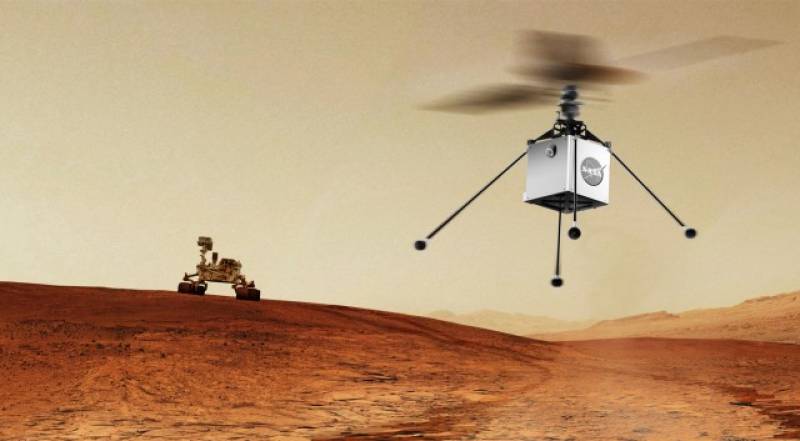 WASHINGTON, D.C. – The National Aeronautics and Space Administration (NASA) is set to send a helicopter to Mars in a landmark test flight of the first “heavier than air” aircraft on another planet.

The small, autonomous aircraft will be blasted into space with the US Space Agency’s Mars Rover in July 2020, a spokesman said.

A team of expert designers spent more than four years shrinking a working helicopter to just 1.8kg (4lbs) or roughly the size of a softball.

We’re sending a helicopter to Mars! Traveling onboard our #Mars2020 rover, this #Marscopter will test our capabilities for controlled flight in the thin atmosphere of the Red Planet and could pave the way for future uses across the solar system: https://t.co/uZFyRmUTgh pic.twitter.com/XlCP9xERub

The machine’s two blades will spin at 3,000 revolutions a minute - three times faster than an average chopper.

It is specifically designed to fly in the atmosphere of Red Planet which is 100 times thinner than Earth’s.

NASA Administrator Jim Brindenstine hailed the mission a “world first” and said: “The idea of a helicopter flying in the skies of another planet is thrilling.”

Scientists will remotely operate the craft all the way from Earth, in the same way a drone is operated.

Orders will be sent from Earth to the red planet and the craft will carry it out on its own.

Due to the atmospheric difference between Earth and Mars, the helicopter will be the equivalent of 100,000 feet in the air at home when it is on the ground on Mars.

'Best day ever’: World's richest man takes a trip to the edge of space (VIDEO)