VATICAN CITY- Pope Francis has removed George Pell and another prominent cardinal from his inner circle after they were under the scandals ahead of a Church-wide meeting on the 'protection of minors' next year.

The Australian cardinal, 77, and Chilean Cardinal Francisco Javier Errazuriz were both removed from the so-called C9 Council of Cardinals, an international advisory body set up by Francis himself, the Vatican said on Wednesday.

The last time the C9 met in September, Errazuriz, who is accused of ignoring reports of abuse in Chile, and Pell, who faces charges in Australia related to historical child sexual offenses, were both absent.

Despite being removed from the C9, Pell remains in charge of Vatican finances, the third most powerful position in the Roman Catholic Church.

The Church has been hit by a series of child abuse scandals in recent years, with widespread allegations of cover-ups, including against the Pope himself.

The Pope had clarified the composition of the C9 ahead of a February meeting with leaders of bishops' conferences from around the world dealing with the 'protection of minors', to which victims of priest sex abuse have been invited. 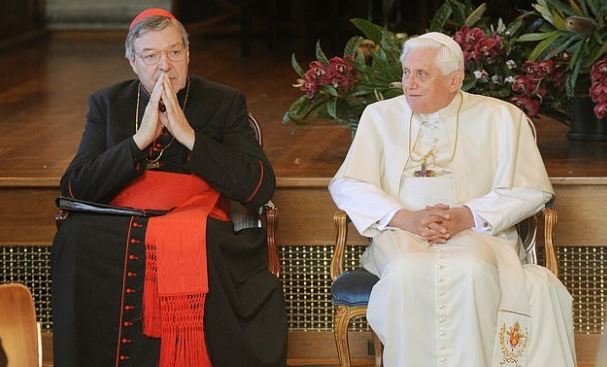 'February's meeting can't resolve all the problems, because there's too much world diversity in the Church. The American (US) episcopacy is panicking, they want to be as radical as possible, while Africans don't want any measures taken,' said a source close to the pope.

Allegations in August from a conservative archbishop that the Pope had ignored abuse suspicions concerning a prominent US cardinal have triggered an internal investigation into Vatican archives ordered by Pope Francis.

During the so-called 'Cathedral trial' earlier this year, it was revealed Pell had been accused of abusing two choir boys while serving as Archbishop of Melbourne. He was alleged to have carried out the crime within the confines of a cathedral.

On Wednesday (yesterday), the Director of the Vatican Press Office, Greg Burke, made the following statement, when asked for a comment on Cardinal Pell and the ongoing prosecution for historical child sexual offenses in the County Court of Victoria. Cardinal Pell denies the charges.

“The Holy See has the utmost respect for Australian judicial authorities.”