Pakistani and Indian filmmakers made 8 documentaries funded by the US, ready for release in June 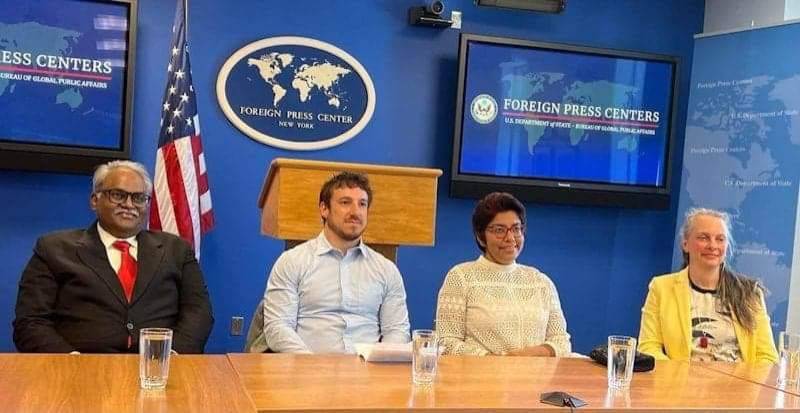 NEW YORK – Pakistani and Indian filmmakers have collaborated with American NGO `Seeds of Peace` to produce eight documentaries that will release in June, next month. Funding for this project is provided by the Cultural Affairs of the US Consulate in Karachi.

The idea of ​​bridging cultural and historical misunderstandings between the people of Pakistan and India through documentaries and the entire project was the brainchild of John Ratigan, Cultural Affairs Officer, in US Consulate Karachi. Who was posted at the Karachi Consulate in October 2020.

During the last 2 years, these documentaries were produced during Code-19, half of which were shot in Pakistan and half in India, while the technical and other workforce related to film production of both the countries was kept the same.

Three films experts participated in the event, which were Ms. Haya Fatima Iqbal from Pakistan, Mr. Sankalp Meshram from India and Marcus Goldbas from the United States. Mr. John Rhatigan a Cultural Officer of the Department of Cultural Affairs at the US Consulate in Karachi and Renee Atkinson, an Associate Director of Seeds of Peace also attended the briefing.

In his virtual remarks, Mr. John Rhatigan from US Consulate in karachi said that," I’m so pleased to be with you today to introduce a project that U.S. Consulate General Karachi has been really proud to sponsor. It’s something that is really a credit to the team I work with. I know you said I was responsible for it – not alone. There are a lot of people here that I work with who really worked to be on this project, who deserve a lot of credit. But we also had a lot of, obviously, success working with the NGO Seeds of Peace, of course, as well."

" This is a project that the consulate’s cultural affairs team started developing a couple of years ago. We saw that while the cultures of India and Pakistan are deeply connected, chances for people of both countries to interact, they can be limited. And so we identified that there could be a way to use the creative arts to build connections and greater understanding, and also to highlight how people from Pakistan and India are more alike than different due to the shared cultures and traditions that they have. At the time that the team here was developing the idea, we were inspired by content like (جتنے قریب اتنے دور), which is about a young Pakistani man and a young Indian woman who connect on a dating app, and AIB’s When India Spoke to Pakistan, which had people connecting from India and Pakistan on the phone and they were having conversations about a lot of shared interests. And so we saw that digital content could really connect the people of both countries and contribute towards building constructive dialogue between both countries." Matheny said.

American film expert Marcus Goldbass said: "They received 500 applications for the project, out of which we had to select a total of 42 teams. Twenty-one from Pakistan and same from India. It was a difficult task because everyone did their best job. These 8 films  Will be available on YouTube next month in June."

Ms. Renee Atkinson from Seeds of Peace said that, So Seeds of Peace is an NGO and we work together tobring people-to-people work across lines of difference to create more just and inclusive societies. This is not easy work, and so we are constantly on the lookout for ways to do that creatively that is more than just sitting at the table over dialogue.

We have got to be able to bring people together in a way that they can relate to the subject matter. And when we saw the proposal for this project, we were – this is us. This is exactly what we would love to do and to bring this to fruition. So obviously we applied and got the grant.

She further added that, "It has been an amazing roller coaster ride with COVID. All the things that we had originally planned in the grant were all in person. This is the first time that our experts have been together for the entirety of the project. None of the filmmakers have met; they are still across that line. And so the fact is that we have these amazing films is just atestament to these three wonderful people. It was a long journey, a lot of sadness along the way of not being able to come together."

Ms. Haya Fatima Iqbal, an Academy Award-winning documentary filmmaker said that, "I think like one of the most important value that I’ve derived from this program is the power of imagination itself, because, when we were about to begin this program, there was a lot of hope that we could pull off something like this, but also a lot of cluelessness about how we’d ever be able to make it happen. But what counted or what mattered the most was the belief that we should really just try to do something, and that it needed to be done. And once you realize the need for it, you try to create ways of making it happen. The Sankalp  come afterward. So the hope that it will work out and the belief that it should be done mattered the most."

Sankalp Meshram, a Film Expert from India said: "I joined this program purely because I knew that this is one way, I’ll be able to meet people from the other side and talk to them. And in a way, that’s also the same kind of emotion that brought a whole lot of participants to the program because dominant within the hearts of Indians and within the hearts of Pakistanis is this love, is this warmth that they actually have for each other. And so, as says in the trailer, that right from the beginning we could sense that electricity when people came together in the meeting, that there was already this emotion.

And the fact is  that all these difficulties which we faced later on, where overcome is actually – the reason they were overcome was because of the emotion that keeps people together. So I think what I’ve gained the most, actually, is this affirmation that there is a lot of love, there is a lot of warmth, and there’s a lot of affection between our two countries. And there is a rhetoric that we hear in the media and everything, but that is not reflecting actually in the interaction between people."

In response to a question by "Daily Pakistan", Is the issue of Kashmir mentioned in the stories of these 8 films?

Mr. Sankalp Meshram said that “There is a misconception among people that people of India are crazy about Kashmir or people of Pakistan are crazy about it, but in reality we met youth, about Kashmir,” we don’t see that intensity in them. This project is a good way for governments to find out. Young people are not so obsessed with history. In fact, today people want to move forward with new ways of communications. The story related to Kashmir was not even found, so we did not have to worry about it."

In response to the same question, Haya Fatima Iqbal from Pakistan said, "I don't think that the real question should be whether we will talk about Kashmir or not. I don't see any problem in talking about it. There are many ways to talk about an issue. There has always been a lot of anger over the coverage of this particular issue or several issues between India and Pakistan. But there is much more to talk about. There are ways."

Haya Fatima continued, "When it comes to Kashmir, I think the people of Kashmir are the best to talk about it. I don't think mainstream Pakistanis or Indians should have anything to say about it."  You have to understand that anger isn't the only way to tell a story. It's not that people are busy solving important issues, it's just that they are now looking for creative and fun ways to talk about serious issues  Which you will see in all these films when they release in June."