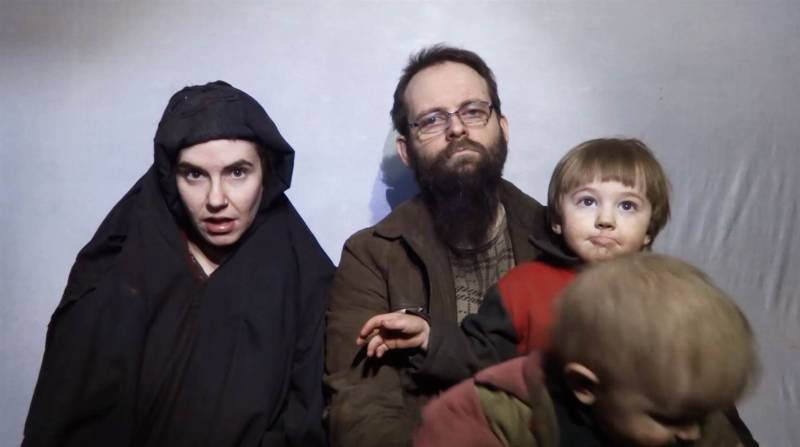 ISLAMABAD - Horrific details of how Canadian national Joshua Boyle, his American wife Caitlan Coleman and three of their children were rescued have unearthed suggesting the meticulous approach harnessed by Pakistani troops to seek the recovery of foreigners held hostage in 2012.

Joshua Boyle, while revealing the details of how the rescue operation was conducted, told his parents that he was in the trunk of the kidnappers’ car with his wife and children when Pakistani forces rescued them.

He said his kidnappers were killed in a shootout that left him with minor shrapnel wounds.

"The last words I heard from the kidnappers were 'kill the hostages'," said Boyle.

The Canadian national, who got in touch with his parents early Thursday told them that they’ve had a third baby in custody, a little girl who was born two months ago.

“My family is obviously psychologically and physically shattered by the betrayals and the criminality of what has happened over the past five years,” Boyle told a Canadian media outlet hours after exchanging views with his parents.

“But we’re looking forward to a new lease on life, to use an overused idiom, and restarting and being able to build a sanctuary for our children and our family in North America,” Boyle added.

Patrick Boyle while revealing his conversation with his 34-year-old son expressed that Josh was doing 'pretty well' as he had spent five years of his life in a hole.

In a conversation with newsmen who thronged the residence of Canadian family after the news of their son's recovery hit headlines across the globe, the parents expressed gratitude as they were overwhelmed by the untoward recovery.

"As soon as I open the door, I could see them both smiling and they just shook their head yes and so give them a big hug," said the emotional Linda and termed her conversation with Boyle as amazing, being the first one in five years.

BREAKING: Patrick and Linda Boyle field questions from reporters about the rescue of their son Joshua and his family #pnpcbc #cdnpoli pic.twitter.com/CCZsG5WyM3

The mother expressed that Joshua was articulate in his letters but in the phone call, he did talk about the horrific recovery and it was pretty bad adding that they were definitely traumatised a little.

"They kept themselves strong for so long, for each other and for the kids. They think they can keep that up, but I think it's going to catch up with them, and they're probably going to have some real crashes, I expect, but we're here for them." she added.

Patrick Boyle detailed that the freed family had all the choices available from returning to Canada or heading to US but the family was waiting for them at their Canadian home.

"They did not board the plane waiting because it was heading to Bagram and they wanted to return straight to North America,"  he responded to a query about Joshua'a denial to travel to Afghanistan.

While quoting Joshua, Patrick said that 35 entirely Pakistani army personnel took part in the interception for which "Joshua was quite effusive in his praise for the Pakistan military".

It bears mentioning that the media wing of Pakistan Army announced on Thursday that they rescued five foreigners held captive by Taliban some five years back.

In the 2016 YouTube video, Coleman refers to “the Kafkaesque nightmare in which we find ourselves” and urges “governments on both sides” to reach a deal for their freedom. She then adds: “My children have seen their mother defiled.”