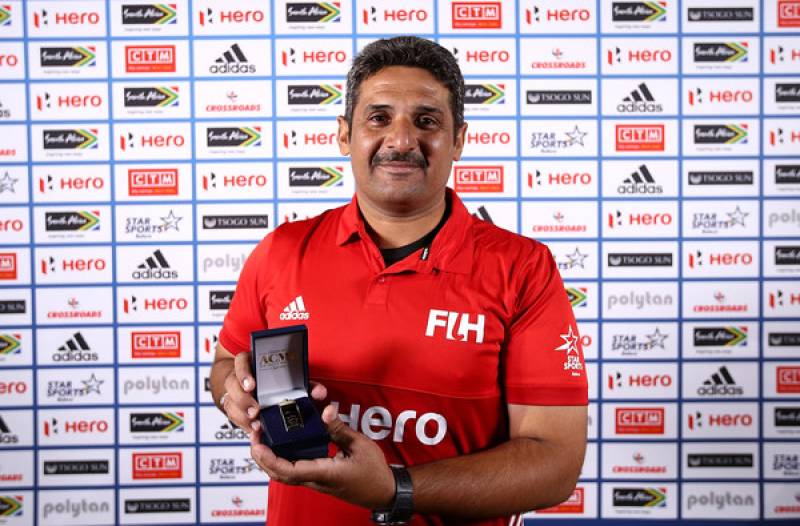 He gained this unique distinction of standing in his 100th match during hockey world league in Johannesburg, South Africa on Thursday, said the information made available to APP here on Friday.

Before the start of the Hockey World League match Germany and South Africa Haider received the Golden Whistle from the FIH. The golden whistle is awarded to umpires on completing 100 senior international matches.

Haider a former national goal keeper also attended quite a few national camps including the one for the World Cup 1998. He started to blow the whistle on domestic circuit in 2002 and next year attended an umpiring seminar conducted by the Asian Hockey Federation in the Malaysian city of Ipoh.

For Haider, it has been a story of the rise and rise since then. After umpiring quite a few regional qualifiers and invitational tournaments, where he got good reports by the tournaments’ Umpire Managers, Haider was promoted to the ‘Promising Umpires’ list of the FIH in Feb 2008.

This enabled him to stand, among others, in continental tournaments like the Pan Am Championships (2008) and the Asian Games (2010) as well as other high profile events such as the Junior World Cup (2009) and the Commonwealth Games (2010). Again, his consistently high-quality performance got him excellent evaluations, and Haider Rasool became a ‘Grade 1’ international umpire in Dec 2010. This up gradation enabled him to stand in the Champions Trophy’s editions.

Next step up was the ‘World Development Panel’ in 2013, a notch below the World Panel (the top most tier). He was among the reserves for the Olympics in 2012 and 2016.

Haider is very hopeful to blow the whistle in the 2018 World Cup and also to be promoted to the World Panel- soon.

“I am a very happy stand in my 100th international match and I am thankful to Allah Almighty for giving me this honour”, Haider told APP.

He attributes his success as an international hockey umpire to his country. “I am thankful to Pakistan Hockey Federation for extending help and support to me to achieve a milestone in my hockey career to have supervised one hundred international matches”, he said.-APP