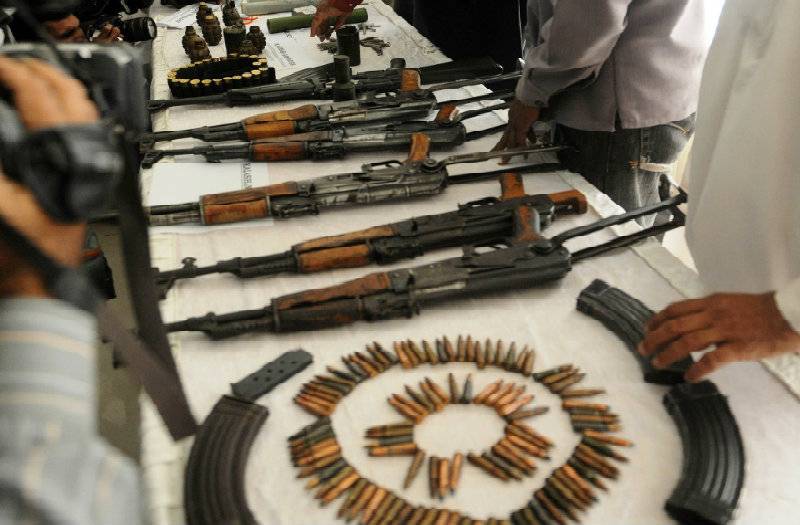 KARACHI (Staff Report) - Police are yet to make any arrest following the raid on a Taliban commander’s compound in Sindh capital city, in which huge cache of weapons and explosives were seized yesterday.

Karachi’s West Zone police on Monday foiled a massive terror plot after raiding a compound in Manghopir area of Karachi.

Though the police could not find any suspect in the compound, a huge cache of weapons including pistols, rifles, sub-machine guns (SMGs), and rocket launchers was seized in the raid.

Also, 40 kg of explosive material, kiln bombs and cracker bombs - enough to smoke a population of thousands - were found from the house in Sultanabad area.

Police have confirmed that the compound was owned by Ehsanullah Mehsud, local commander of terrorist group Tehrik-e-Taliban Pakistan (TTP).

The explosives and ammunition were stored secretly inside the compound, in a bid to carry out a major terrorism activity on Eid-ul-Fitr, police sources said.

Despite making no arrests so far, security agencies are investigating whether the weapons seized during the raid had been used for terrorist activity inside the city in the past.

On the other hand, Senior Superintendent West Pir Muhammad Shah has warned people in his own department against involvement in smuggling or extortion, adding that such elements would be dealt with like any other culprit.