Cyclist who raised her 'middle finger' to Donald Trump to get over $80,000 from GoFundMe campaign 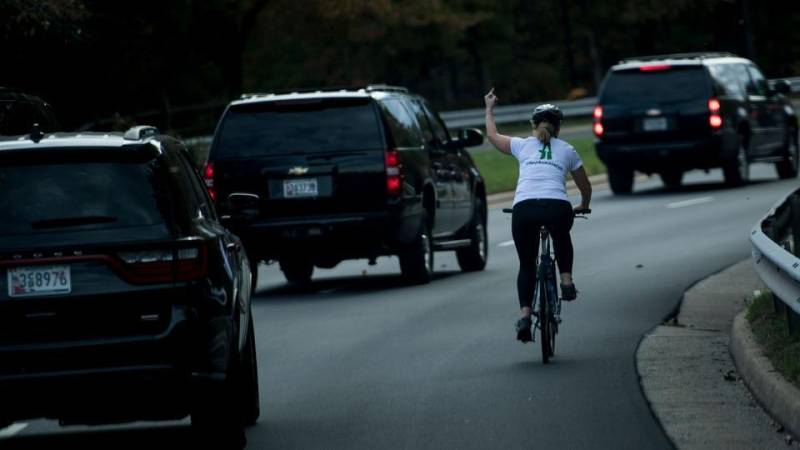 WASHINGTON - A cyclist sacked by her employers for flipping off Donald Trump’s presidential motorcade as it drove by looks set to receive more than $80,000 from a GoFundMe campaign.

Juli Briskman was out cycling in Sterling, Virginia, when she made the gesture towards the US president as his vehicle left Trump National Golf Course. The image went viral and Briskman was later fired after the incident caught the attention of her employer, Akima LLC, an engineering company.

Now a GoFundMe campaign has been set up in Briskman’s honor, describing her as an “inspiration.” So far more than $80,000 has been raised in $5, $20, and $100 donations. All proceeds of the $100,000 goal fund are expected to go to Briskman in an effort to alleviate any financial woes she may have.

Responding to the news of the collection, Briskman said she never imagined a “one-finger salute” would result in her contract being terminated. Highlighting her concerns at covering bills, Briskman thanked people for their support.

She said: “I was shocked and worried about many things: How would I pay for healthcare? How much money do I have in my savings to cover our mortgage and general living expenses in Northern Virginia and how long will it last?”

“Through your very generous donations, many of those heavy burdens have been lifted. I am not sure what the future holds, but I am buoyed by your support.”

The US president was making his 96th visit to one of his properties when Briskman saw red and flipped him the finger.