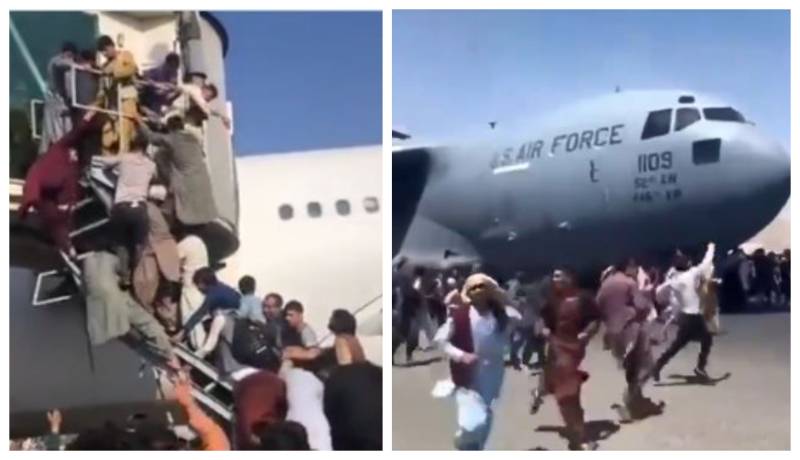 At least ten people were killed and around a dozen injured after chaos spiralled at the Kabul airport as hundreds of people rushed to board flights after Taliban regained power in the country, it emerged on Monday.

The airport administration reportedly said that people thronged to the Hamid Karzai Airport after receiving false information that seats are available in departing planes.

The Pentagon said that all flights have now been halted after several incidents occurred at the airport. The US also announced to send another 1,000 troops to help with its military’s evacuation operation.

Furthermore, Afghan aviation ministry in a statement said that country's airspace has been closed for all commercial flights, advising all airlines to reroute their next flights.

A number of videos circulating on social media show scenes of panic and chaos at the Hamid Karzai International Airport on Sunday night and Monday, and desperate people can be seen trying to break into planes and running after a US military plane taxing on the runway.

The scene outside the Kabul airport gate this morning, where people were arriving by the thousands and things were rapidly spiraling out of control, as false rumors spread of flights out for anybody without visas. Several killed inside and outside already. pic.twitter.com/Rzdi2D9BTe

After Kabul fell to the Taliban Sunday afternoon without any violence following the escape of President Ashraf Ghanit, the group announced a general pardon and asked people not to leave the country.

A video shows a chaotic scene at the airport where people trying to board a flight.

In another video, a large group of people can be seen running after a plane on the runway. Three of them clung onto the landing gear of the plane but they fell down as it took off, leaving them dead.

Insane. Don’t have any other words.

At least five people were killed in Kabul airport while forcibly entering planes.

Meanwhile, US forces opened fire in the air at Kabul's airport on Monday to disperse hundreds of civilians running onto the tarmac.

"The crowd was out of control," , a US official said told Reuters by phone. "The firing was only done to defuse the chaos."

KABUL — The Taliban claimed on Sunday to have taken control of Afghanistan's presidential palace. Two senior ...