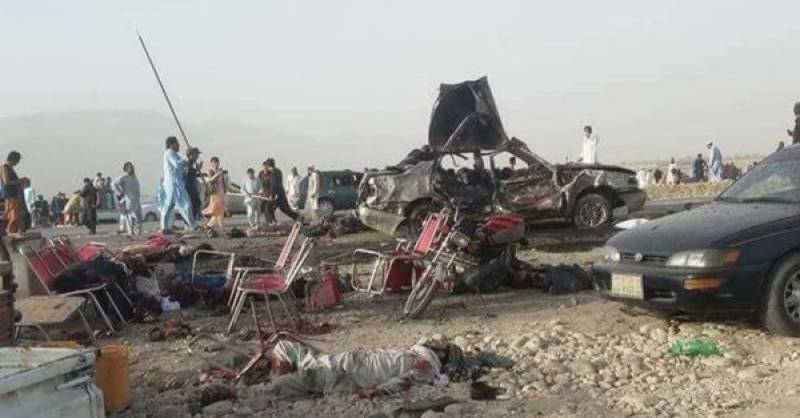 Nangarhar spokesman Attaullah Khogyani said the explosion happened in Rodat district at an Eid gathering between Taliban and Afghan security forces who were celebrating the ceasefire. Another 65 people, including Taliban and civilians, were injured in the explosion, he added.

He confirmed that it had been a suicide bombing and not an accidental explosion as earlier reported.

The ToloNews earlier quoted sources as saying that explosives in a Taliban vehicle reportedly exploded.

Afghan government has said it will continue operations against other insurgent groups, including Daesh, and only Taliban are part of the ceasefire.

Daesh militants are active in parts of Nangarhar province.

KABUL - Afghan forces and Taliban militants celebrated Eidul Fitr together in the country following an unprecedented ...

The Saturday's blast followed Afghan President Ashraf Ghani’s announcement of an extension of the government's week-long ceasefire with the Taliban.

In a rare televised address to the nation on Saturday morning, Ghani also asked the Taliban to extend their three-day ceasefire which is due to end Sunday.

"I order the security forces to remain on their defensive positions," Ghani said, adding details of the extension would be released later.

To respect the public's wishes and to support their demands about peace, I am ordering the security and defense forces to extend the ceasefire from the fourth day of Eid. We will soon share the details of the proposed ceasefire with the nation.

We also request the Afghan Taliban to extend their ceasefire. During the ceasefire, we will provide medical assistance to the wounded Taliban, and will provide them any humanitarian assistance if needed,. Taliban prisoners will also be allowed to contact and see their families.

The government's ceasefire was due to end Tuesday.

His announcement comes as Taliban fighters and Afghan security forces hugged and took selfies with each other across the country as an unprecedented ceasefire in the war-torn country held for the second day of Eid.

Villagers also flocked around the insurgents, hugging them and happily taking selfies with the heavily armed fighters as they celebrated the Muslim holiday capping the holy month of Ramazan.

The Taliban announced a ceasefire for the first three days of Eid, which started Friday, promising not to attack Afghan security forces for the first time since the 2001 US invasion.

They said they would continue attacking US-led NATO troops.