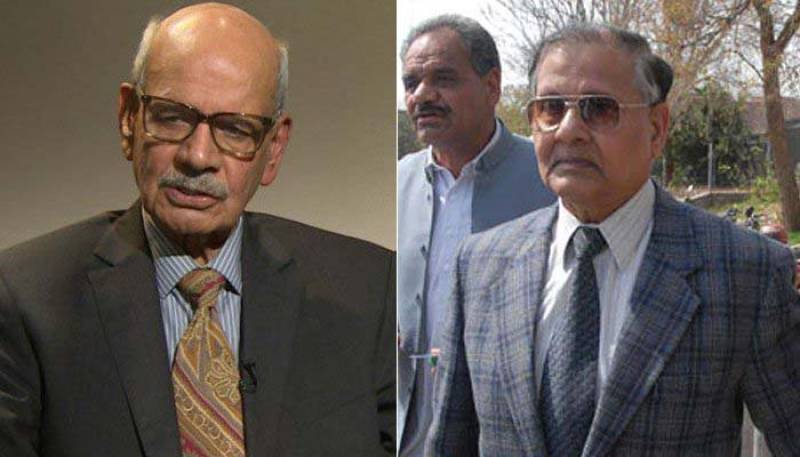 According to media reports, the former top generals will record their statements today before the committee headed by Ahsan Sadiq, a Grade 21 official associated with the FIA, comprising Dr Usman Anwar, Dr Rizwan and FIA Director Law Ali Sher Jakhrani.

The special committee was constituted after the Chief Justice of Pakistan Justice Saqib Nisar gave the federal government a week’s time to summon a cabinet meeting for determining actions to take for the implementation of 2012 Asghar Khan case verdict.

During the hearing on May 9, the top judge rejected review petitions of former army chief General Mirza Aslam Beg and former Inter-Services Intelligence DG Lieutenant General Asad Durrani and remarked that the court had given its order in the case which should be acted upon.

The petition was filed when Justice Nasim Hassan Shah was the Chief Justice, however, the verdict came after a span of 16 years on October 19, 2012 when the apex court issued a 141-page verdict, ordering legal proceedings against Gen (retd) Beg and Lt Gen (retd) Durrani, however, nothing substantial was done in this regard.

Asghar Khan, who passed away in January this year, was represented in the Supreme Court by renowned lawyer Salman Akram Raja.

Later, Beg and Durrani had later filed a review petition against the verdict, while these petitions were turned down by the Chief Justice Mian Saqib Nisar. However, both military officials refused the findings of the court in the case.

The apex court’s ruling also has implications for former prime minister Nawaz Sharif, who had also been accused of receiving money ahead of the 1990 general election. The court also sought a reply from the federal government regarding executing the verdict.

The court also remarked that both retired officers would face the consequences of their illegal acts. Justice Ijaz ul Ahsan, who is a member of the bench, asked another member whether the case can be sent for court martial.

During the hearing, the DG FIA was also summoned to inform the court about progress in the probe. The DG said that 12 accused in the case had died while statements of 18 persons have been recorded. He added that the probe was stopped after review petitions were filed. The FIA head further said that all accused were refusing the fact on receiving funds for election campaigns.

Later, the bench asked the FIA official to inform the court regarding the implementation of the 2012 verdict as review petitions have been turned down.