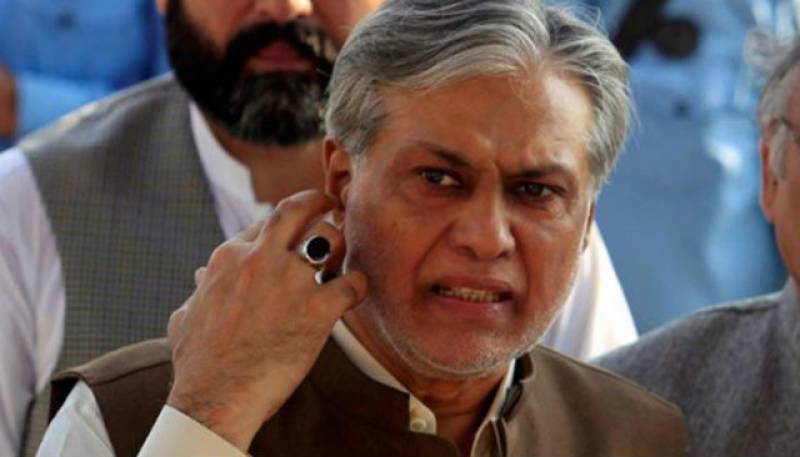 ISLAMABAD - An accountability court hearing a graft reference against Finance Minister Ishaq Dar on Thursday recommended the interior ministry to put his name on the exit control list (ECL).

Earlier this week, the National Accountability Bureau’s court had issued non-bailable arrest warrants for the finance minister for his constant failure to appear before it.

According to local media reports, a formal request has been sent to the interior ministry to put Dar’s name on the ECL. The request also includes a covering letter and a copy of non-bailable arrest warrants issued by the accountability court.

The court also issued a notice to Dar’s guarantor for failing to ensure the presence of the minister and adjourned the hearing until November 21.

The interior ministry was informed that the finance minister - who is in London to receive medical treatment for his heart condition - had not been appearing deliberately before the NAB court.

A three-member committee of the interior ministry would decide on the NAB’s recommendation in the next 72 hours.

In September, a NAB court had indicted Finance Minister Ishaq Dar in a reference regarding owning assets beyond his known sources of income.

The finance minister, who has skipped four court hearings on account of medical treatment, is accused by NAB of possessing assets disproportionate to his declared sources of income.

A corruption reference pertaining to Dar's owning assets disproportionate to his known sources of income was filed by the NAB in light of the Supreme Court's July 28 judgment in the Panama Papers case.

The bureau froze the assets after its chairman ordered to do so on October 18 but it needed the court's endorsement as according to NAB laws, the order is only valid for 15 days.

The anti-graft watchdog was seeking the freezing of Dar's six bank, properties and vehicles in Pakistan and the United Arab Emirates as well as investments in both countries.

NAB has listed the properties and assets of Dar as follows: A house in Gulberg, Lahore, a two-kanal plot in Parliamentarians Enclave, Islamabad, a two-kanal plot with Ayaz Builders (Pvt) Ltd, a plot in Senate Cooperative Housing Society, Islamabad, a two kanal and 19 marla plot in the name of Mrs Tabassum Dar, three plots in Alflah Housing Society, Lahore owned by Dar, his wife and son Ali Mustafa Dar and six acres in Mouza Milot owned by him and his wife.

In the list of foreign properties and assets, the NAB mentioned a flat in Emirates Hills Dubai, owned by Dar, an apartment in Palm Jumairah Dubai, a 2003 Bentley Arnage car, a 2006 Mercedez, two sets of shares/investment in Baraq Holdings (Pvt) Ltd and shares/investments in Al-Nahayan owned by Ishaq Dar.

Moreover, Dar and his wife have made an investment of Rs3,453,060 in Hajveri Holdings (Pvt) Ltd and Rs2,700 shares by in Sui Northern Gas Pipelines Ltd.