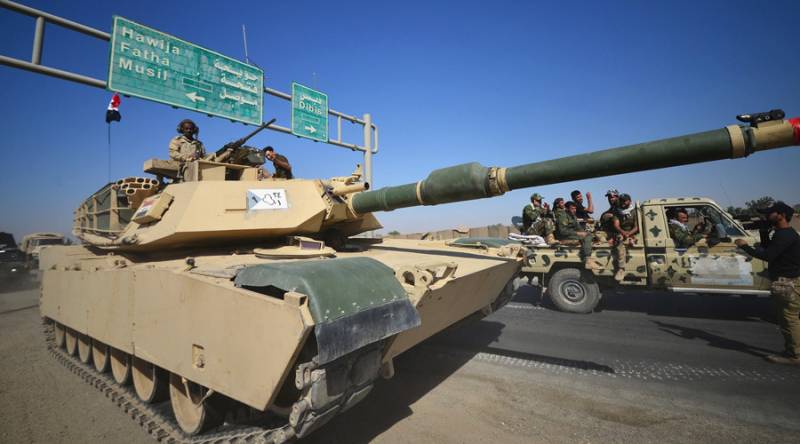 KIRKUK (Iraq) - The Kurdish Peshmerga forces say that the takeover of Kirkuk is “a flagrant declaration of war” against the Kurds and warned that the Iraqi prime minister would pay a “heavy price” for triggering the conflict.

The Iraqi flag has been raised over the disputed city of Kirkuk and other Kurdish-controlled areas, on Iraqi Prime Minister Haider al-Abadi’s orders.

Iraqi soldiers lower #Kurdistan's flag in Kirkuk, throwing it on the floor as they enter the city with Hashd al-Shaabi. #KurdistanBlockade pic.twitter.com/xOiu1Yx6eL

The “attack” on Kurdish-controlled Kirkuk by Iraqi troops is “a flagrant declaration of war against the nation of Kurdistan,” the Peshmerga General Command said in a statement earlier, as cited by Rudaw.

The Peshmerga described Baghdad’s move as “retaliation against the right of the people to vote on their fate,” referring to last month’s referendum on Kurdistan’s independence, in which 92.7 percent voted to secede from Iraq.

The Monday developments reveal a split in Kurdish factions, as some of the militias were reported to leave Kirkuk without a fight amid reports of clashes between the Iraqi Army and the Peshmerga.

In a statement, the Peshmerga accused a faction from one of the two main Iraqi Kurdish political parties, the ruling Patriotic Union of Kurdistan (PUK), of “plotting” against the Kurds and committing “a great and historic treason.”

“It is my constitutional duty to work for the benefit of the citizens and to protect our national unity that came under threat of fragmentation as a result of the referendum that was organized by the Kurdish region,” al-Abadi said in a statement.

The Prime Minister added that the vote was held in violation of the constitution and said that the Kurds “chose their personal interests over Iraq’s interests.”

Immediately after the Iraqi forces made their Kirkuk move, conflicting reports began coming in about the Kurdish-controlled oil fields and facilities in the region. Media reports indicate two oilfields – Bai Hassan and Avana – shut down production.

The reports were followed by indirect threats from Baghdad. Iraqi forces could be deployed “in a very short time” to regain control over Kirkuk oilfields and restart oil production, a senior Iraqi oil official was cited by Reuters as saying.

“We will not allow them to shut down production. We’ve got confirmation from military commanders that it’s a matter of a very short time,” the official said.

The Kurdish Ministry of Natural Resources, however, tweeted that the reports were “not true.”

Earlier, a spokesman for North Oil Company said the oil ministry had warned the Kurdish authorities against any action “that would cause crude oil flow disruption from Kirkuk oilfield.” The company has asked the central government and oil ministry to deploy “security forces to intervene and prevent Kurdish crews from mismanaging production,” according to the spokesman.