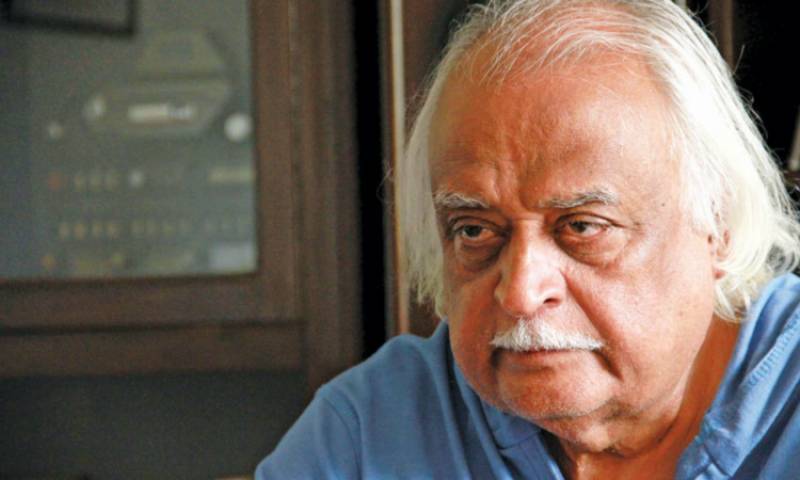 Talking about his family’s move from India to Pakistan at the time of Partition, Maqsood said: “Patel, Nehru…everyone was involved and they said you’re ok here, don’t go… but Nana decided that we will go.”

He went on to describe how soldiers accompanied them on their train journey to Bombay after which they took a Jahaz (helicopter) to Pakistan.

Sharing the story of his family’s life in a newly-created Pakistan, Maqsood said that there was a lot of struggle after his father passed away. He remembered drilling a hole in a wall so his grandmother could hear the news on the neighbour’s radio.

He sang Aaj Rung Hai with his son on the guitar and told those watching what Ghalib would have said about the lockdown. The father-son duo had amazing energy and kept the audiences entertained. Unfortunately, Bilal did not save the session on his phone.

Talking about the Urdu language and Bollywood, he said as long as they are making films in India, Urdu lives on. “People say that Urdu will be extinct in Hindustan soon. How is that possible? Their film industry thrives on Urdu…it’s in their dialogues, their songs…”

In Pakistan, he said the Urdu adab is in DHA Phase 6, Lalukhet, Nazimabad graveyards.

How many of these Strings riffs can you identify? No. 2 and 5 might be tough. Let’s see who is a true Stringer. #stringsonline #lockdownmusic #stayhome

Maqsood also discussed the state of Pakistani television, reminisced about his dear friend, the late Moin Akhtar and a chance interaction with artist Shakir Ali which inspired him to paint.