Where does the buck stop? The freefall of PKR 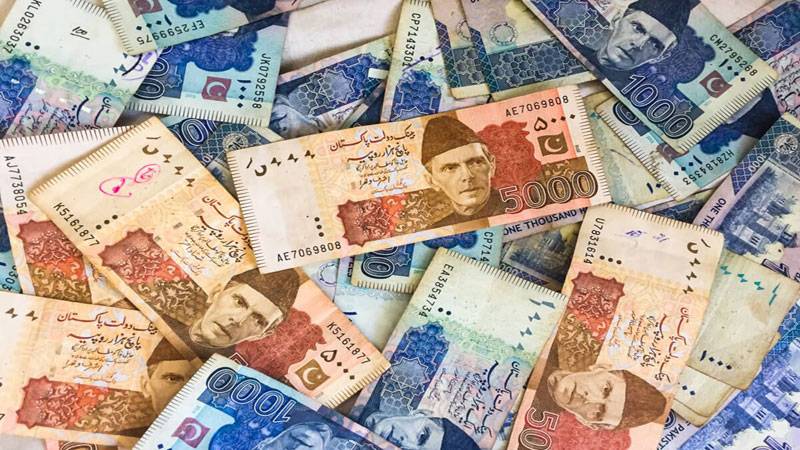 The Pak Rupee (PKR) has depreciated by more than 34 percent during the last 12 months, and by almost 15 percent during the last six months, in the run-up to the International Monetary Fund’s (IMF) Extended Fund Facility (EFF) program. Technical jargon aside. Why did the PKR depreciate by so much? What is the fundamental value of PKR? How much more can it potentially depreciate? These are some questions that we try to answer in this space.

Why do we need Foreign Currency (FCY) to begin with? Simply put, we need FCY to pay for our imports, and our imports are more than 2x of our exports. Fuel (oil and gas) imports make up almost a quarter of our import bill, followed by machinery oil at 15 percent, chemicals at 14 percent and other merchandise.

On the flip side, we also generate FCY through exports, and through inward remittances sent by overseas Pakistanis. However, the FCY generated through exports and remittances is not enough to satiate our need for imports, resulting in something popularly known as Current Account Deficit.

In order to bridge that deficit, we resort to borrowing FCY, either through friendly countries or through private lenders. The loans obviously have an interest payment attached and have to be either repaid or refinanced at a later stage. In essence, the interest and principal repayments of these loans also become a part of the current account deficit. When even that borrowing is not enough, we knock on IMF's door as a lender of last resort, the latest knock in 2019 being the twenty-second knock in 60 years.

To keep satiating our need for imported goods, we need more and more of FCY, and as demand for anything increases, it's price also increases. As the price increases, goods continue to get expensive in PKR terms, be it fuel, or basic food staples, and so on, resulting in an inflationary spiral.

The theory goes that as FCY becomes more expensive, and PKR becomes cheaper, imports become more expensive for the local population, which either has to reduce its demand for imported products or substitute the same with local products. This results in a rough adjustment period, where real incomes and purchasing power reduces. Extending that theory, as PKR becomes cheaper, our exports become more competitive in the global market, resulting in a potential increase in exports -- however, reality kind of diverges from theory here.

Since we now know why PKR depreciates, let us try to figure out the fundamental value for PKR. There are no correct answers here, and economic theory can only provide a broad framework, rather than precise estimates. On a very fundamental level, the price of any asset is simply the point where a buyer and seller can meet to do a transaction – a point where demand and supply intersect. In a similar spirit, the price can be managed through tweaking demand, and supply factors. Such tweaks have been extensively utilized by various regimes in the past to maintain the value of PKR in a certain range.

In the current economic environment, the focus of policymakers is on reducing the current account deficit, while pushing up exports – suggesting that there exists a strong bias to maintain an undervalued PKR, such that Pakistan’s exports can become competitive in the international market, and consequently our exports can increase.

But how does one determine whether a certain currency is undervalued, or overvalued? A measure which is frequently used to assess the same is Real Effective Exchange Rate (“REER”), which is essentially a measure of the value of a currency against a weighted average of several foreign currencies, divided by a price index. An increase in REER suggests that exports are now more expensive, while imports are cheaper – resulting in a loss of trade competitiveness. 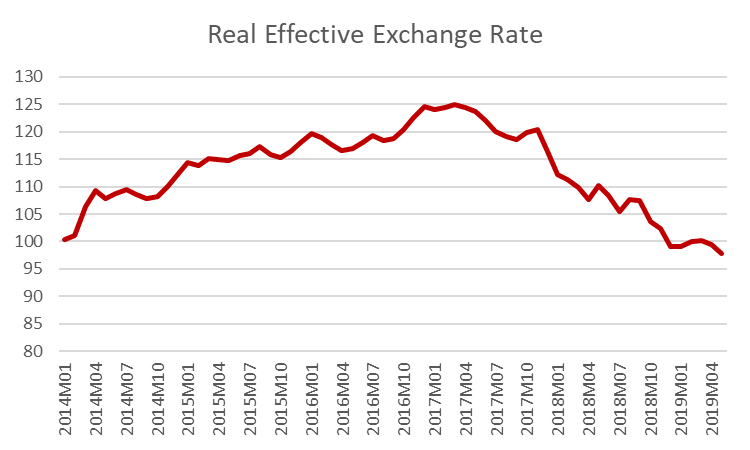 It can be seen from the graph above that from 2014 onwards, REER for PKR continued to increase, reaching a peak of 125 in early 2017. As REER continued to increase, our exports kept on losing their competitiveness, while our imports continued to become cheaper, resulting in an import-led consumption boom. As the current account deficit position became unsustainable from 2017 onwards, the powers at the helm allowed gradual depreciation of PKR. Since the process of depreciation was initiated in 2017, the PKR has lost more than 52 percent of its value against the USD. During the last 12 months, the PKR has lost more than 34 percent, suggesting that the bulk of depreciation took place during the period.

As of May-19, REER was at 98, which even though lower than a 5-yr average of 115, may still not be low enough to make Pakistani exports more competitive. As of mid-July 2019, PKR-USD was trading in the range of 160 – which suggests a REER in the range of 90. In essence, during the last six weeks, PKR has depreciated by almost 9 percent.

A REER of 88 is the lowest level PKR has seen in the last few decades, and the currency is certainly undervalued now. However, considering how the IMF program has been structured largely on the lines of the Egyptian program – there exists a strong possibility that our policy managers may mimic the Egyptian currency management strategy to bolster exports, and curtail imports. In order to ward off pressure on the Egyptian economy, REER for the Egyptian Pound (EGP) was brought down to a range of 75-80.

Keeping that precedence in check, a REER for PKR at 80 implies a PKR-USD parity of 180 or another depreciation of 12.5 percent from current levels. It is at these levels the PKR may actually stabilize after being in a free fall for the last twelve months, and this is where the buck may actually stop. However, the second-round effects of PKR depreciation in terms of higher input costs, higher inflation, and eventually high-interest rates will continue to further feed into a stagflationary regime as demand contraction takes place, with both businesses and labour force alike adjusting to a new economic paradigm.