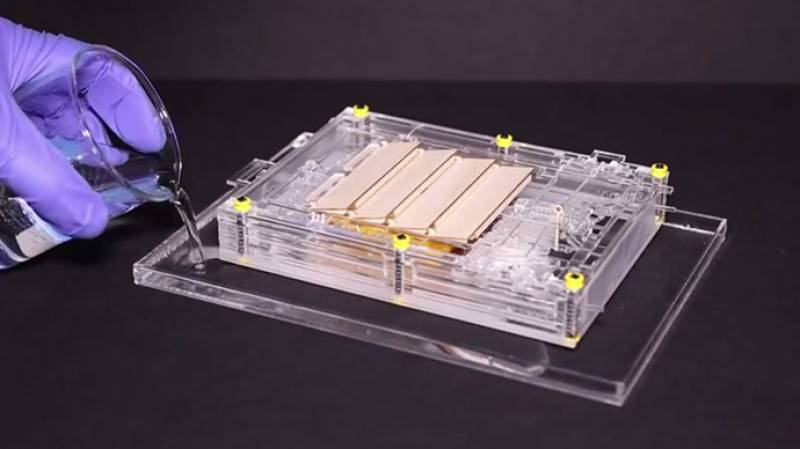 The small device, created by researchers at Columbia University, is a fully functional engine which can generate 1.8 microwatts of energy – enough to power LED lights or even a tiny car – all for the cost of $5. It works by drawing power from a process never considered to be a potential energy source before.

“Engineered systems rarely, if ever, use evaporation as sources of energy, despite myriad examples of such adaptations in the biological world,” a paper published in Nature by a team of authors, including researchers Xi Chen, Ozgur Sahin and others, claimed.

While seeming to violate the laws of physics by creating energy from nothing, the engine, which measures less than four inches on each side, is able to generate energy from extremely small temperature differences in ambient evaporation.

The innovation was made possible utilizing hygroscopy-driven artificial muscles (HYDRAs), which the inventors call the engine’s “living” parts, which expand and contract with infinitesimal changes in humidity. The breakthrough came when Columbia researchers found that some bacterial spores expand when they absorb moist air and shrink when they dry.

“And HYDRAs change shape in really quite a dramatic way: they can almost quadruple in length,” Ozgur Sahin, leader of the Columbia University team, told Popular Mechanics.

Harnessing this process, the team made “evaporation engines” to put the force to work. A set of shutters were put into place so as to lift when the artificial muscles extend, expel air, and then return to their initial position. This principle was applied to a rotary engine that spins when only one side is exposed to moist air and the other side expels it.

“This is a very, very impressive breakthrough,” Peter Fratzl, a biomaterial researcher at the Max-Planck Institute of Colloids and Interfaces in Potsdam, Germany said. “The engine is essentially harvesting useful amounts of energy from the infinitely small and naturally occurring gradients near the surface of water. These tiny temperature gradients exist everywhere, even in some of the most remote places on Earth.”

It may be a little while into the future, but the researchers at Columbia believe this breakthrough raises hopes that the innovation could be applied in creating super-efficient energy sources, and be utilized in many other new products as well. Applications in consumer electronics and even muscles for robots could be within the realm of possibility. All it will take is human innovation. Just add water.