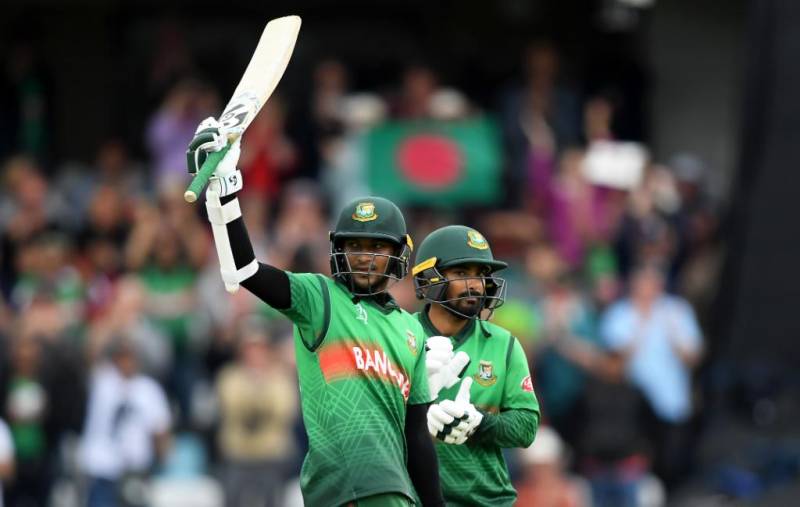 Needing 322 to claim their second win of the tournament, Bangladesh were powering towards victory as they repelled the West Indies' barrage of bouncers to reach 248-3 after 34 overs at Taunton.

Shakib was unbeaten with 13 fours in his 83-ball innings, while Liton Das was 47 not out from 41 deliveries.

Only once previously have Bangladesh managed 322 batting second, against Scotland in 2015, while the highest chase so far in this World Cup was New Zealand's 248 against Bangladesh.

But the Tigers had already posted 330 in the first innings of their win over South Africa earlier in the competition and they were well on course to make history against the West Indies.

Opener Tamim Iqbal paved the way in the chase with six fours in his 53-ball innings of 48 before being superbly run out by Sheldon Cottrell.

Tamim, who hit over 30 for the first time in the tournament, and Soumya Sarkar had taken the score to 50 in the ninth over.

But Soumya was dismissed for 29 when he scooped Andre Russell to Chris Gayle in the slips.

There were huge cheers from the Bangladesh fans around the ground when Shakib became just the second player to score 6,000 career ODI runs for the Tigers.

After reaching his fifth successive ODI 50, Shakib -- who scored 121 against England earlier in the tournament -- took command with a scintillating innings that climaxed when he stroked a boundary to reach his century.

Earlier, Shai Hope's 96 and the joint-fastest fifty of the tournament from Shimron Hetmyer helped them reach 321-8.

The Windies couldn't be contained in the second half of the innings as Hope laid the foundations for his country's fourth highest World Cup score with a resolute 121-ball innings.

Hitting around Hope, Evin Lewis made 70 from 67 balls before Hetmyer smashed 50 in 26 balls, featuring four fours and three sixes. 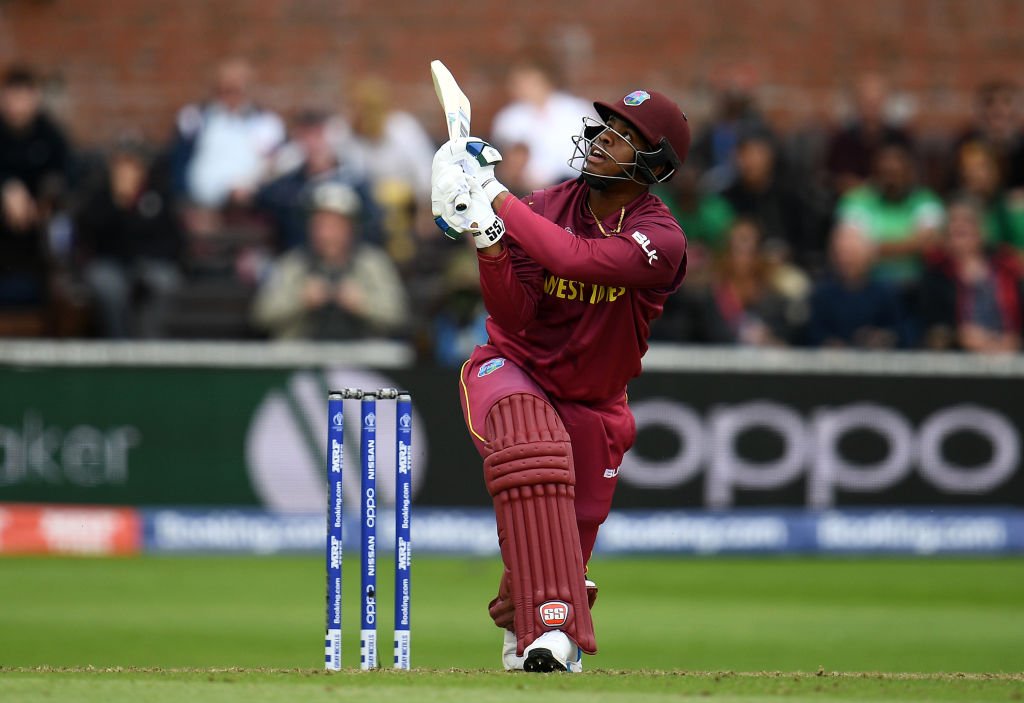 It was the equal fastest 50 in this year's tournament and the third quickest by a West Indies batsman in World Cup history.

West Indies opener Gayle was expected to wreak havoc in the tournament, but the big-hitting 39-year-old has only managed scores of 50, 21 and 36.

Once again Gayle looked out of sorts and he went 12 balls without scoring before dangling his bat limply at Mohammad Saifuddin's seaming delivery on the 13th, with the edge held low down by wicket-keeper Mushfiqur Rahim.

Lewis kept grinding away and reached his first World Cup fifty from 58 balls.

Lewis's partnership of 116 with Hope was the West Indies' first century stand of the World Cup.

A towering six from Nicholas Pooran off Mehidy Hasan Miraz left a hole in the roof of one of the Taunton stands.

But Pooran, on 25 from 30 balls, perished when he tried to slog-sweep Shakib and miscued to Soumya Sarkar at long-on.

Urgency was finally injected into the innings, Hetmyer followed Pooran's gung-ho example with a sublime display of hitting.

Blasting boundaries to all parts of the ground, Hetmyer passed 1,000 ODI runs in his 27th innings.

His flamboyant display was curtailed when he holed out off Mustafizur Rahman.

Skipper Jason Holder's 33 from 15 balls -- including four fours and two sixes -- filled in admirably for Hetmyer to ensure the Windies went past 300.

Bangladesh have had the upper hand against the West Indies in recent meetings, winning six of the last seven, including all three games in the Tri-nation series in Ireland last month.

Both the West Indies and Bangladesh have won one of their four group matches, with two defeats and one no result apiece.