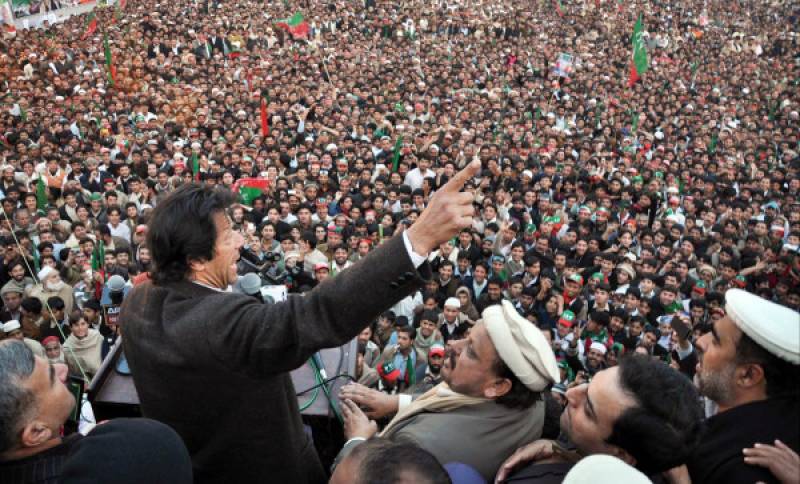 I do concede, however, that there is some friction between liberalism as a cultural temperament and Islam as a conservative religion. But democracy isn’t about religion or culture. It is simply a multi-party, representative political system that confers legitimacy upon a government which comes to power through an election process which is a contest between more than one political parties in order to ensure that it is voluntary.

Thus democracy and politics are mostly about matters of governance and economics, while culture is mostly about social and moral values and the kind of social matrix that we, as individuals and families, would like to construct around us. There is some overlapping between politics and culture but as a heuristic principle this distinction holds true.

When I will discuss the political pragmatism of Imran Khan’s Pakistan Tehreek-e-Insaf (PTI), the reader will further appreciate the fact that realpolitik is mostly about power and rarely about cultural matters.

Let us admit at the outset that Imran Khan is an educated, well-informed, articulate and charismatic leader. Being an Oxford graduate, he is better informed than most of our domestic politicians. And he is a liberal at heart. Most readers would not agree due to his fierce anti-imperialism and West-bashing demagoguery, but I’ll try to explain.

Like I have argued earlier that there is a difference between politics and culture; anti-imperialism is a political stance and liberalism is a cultural temperament. The renowned American political philosopher, John Rawls, introduced the theory of “Reflective Equilibrium” to political science. It states that our minds try to create harmony between different sets of beliefs and actions. If there is divergence between our beliefs and actions, it leads to cognitive dissonance. In order to avoid this reflective disequilibrium, we try to attune our beliefs and ideology to bring them in conformity with our actions and vice versa.

Now if Imran Khan is supposedly a conservative Islamist, then his mind must be a psychological singularity. A playboy, cricketer-turned-politician who spent most of his youth in the West chasing famous celebrities all over the world, how could he be an Islamist or a conservative? How would his mind create reflective equilibrium between his beliefs and his licentious actions? It is simply inconceivable for him to be an Islamist or a conservative. The only ideology that suits his temperament and lifestyle is freewheeling liberalism.

A clarification is needed here: when I say that he is not an Islamist, I mean that he is not a political Islamist; I am not questioning his personal faith as a Muslim. He seems like a liberal and secular Muslim.

Although the phrase “secular Muslim” might sound oxymoronic to perceptive readers, but it’s a fact that culture plays a much more substantial role in forming our mindsets than religion, as such. A Muslim living in a developed Western society would generally adopt a liberal interpretation of scriptures; a Muslim who has been brought up in the urban middle class of the Muslim-majority countries would adopt a moderately conservative interpretation of sacred texts; and a rural and tribal Muslim who has been indoctrinated in a religious seminary would adopt extreme interpretation of the same scriptures.

More to the point, it’s not just Imran Khan’s playboy nature that makes him a liberal. He also derives his intellectual inspiration from the Western tradition. The ideal role model in his mind is the Scandinavian social democratic model which he has mentioned on numerous occasions, especially in his speech at Karachi before a massive rally of singing and cheering crowd in December 2012.

His relentless anti-imperialism as a political stance may have partly to do with his personal experience of encountering racism in the West and partly because it is based on facts. What neocolonialists have done in Afghanistan and the Middle East evokes strong feelings of resentment among Muslims all over the world. Moreover, Imran Khan also uses anti-America rhetoric as electoral strategy to attract conservative masses, particularly the impressionable youth.

Notwithstanding, if Imran Khan is a liberal at heart, what is PTI then? Some of its stalwarts like Assad Umar, Shireen Mazari, Jahangir Tareen, Khursheed Mehmood Qasuri and Shah Mehmood Qureshi also have liberal credentials. Additionally, we need to keep in mind the fact that PTI derives most of its support from women and youth. Both these segments of society, especially the women, are drawn more towards egalitarian liberalism than patriarchal conservatism, because liberalism promotes women’s rights and its biggest plus point is its emphasis on equality, emancipation and empowerment of women who constitute more than 50% of population in every society.

Regardless, I think that a better way to determine PTI’s position in the Pakistani political spectrum would be to break it down in various components and then analyze them. The Punjab and Karachi chapters (urban centers) of PTI are quite liberal in their outlook; some right-wing politicians even accused the PTI rallies in Lahore, Karachi and Islamabad as obscene in the Pakistani social milieu. Those rallies weren’t obscene by any stretch of imagination but in a segregated, patriarchal culture, the mere intermixing of men and women at public places is also frowned upon.

The Khyber-Pakhtunkhwa (KP) chapter of PTI, however, casts some aspersions on the liberal credentials of PTI, where it swept the elections from NA-1 to NA-20 and formed a coalition government with the religious hardliners. But the elections in KP were fought on a single issue: Pakistan’s stance on the war on terror and its partnership with the US.

The KP province is the war on terror’s worst affected province of Pakistan; in the 2013 parliamentary elections, PTI stood for dialogue and political settlement with the militants, while the Pashtun nationalist, Awami National Party (ANP), favored military operations in KP and tribal areas. But since the residents of KP have witnessed firsthand the sufferings of internally displaced people of Swat and tribal areas, therefore they overwhelmingly chose pro-peace PTI over pro-war ANP.

Finally, it appears that the PTI’s supporters in Punjab, Karachi and even KP’s urban areas have a more liberal outlook while the PTI’s supporters in the rural areas of KP are comparatively conservative. Therefore my conclusion would be that Imran Khan himself is a liberal but PTI is a hotchpotch of electable politicians from diverse political backgrounds; though it has the potential to emerge as a liberal political party on the Pakistani political scene.

In a nutshell, compared to the certified liberal political party, Pakistan People’s Party (PPP), I would place PTI as right-of-center; but in relation to the right-wing, Pakistan Muslim League, I would categorize PTI as left-of-center political party in the Pakistani political spectrum. Unlike the elitist PPP, however, which is led by the Westernized Sindhi feudals and represents the traditional and rural masses of Sindh province, the broad-based and urban middle class vote bank of Imran Khan’s PTI is genuinely representative and liberal.