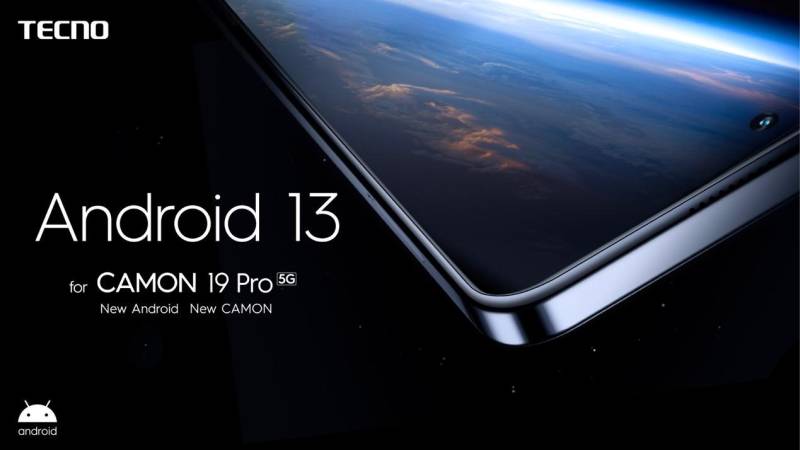 LAHORE - TECNO becomes one of the first smartphone brands to bring the latest Android 13 Beta. TECNO has been excelling in bringing the latest technologies to its consumers and is taking a step ahead with the upcoming CAMON 19 Pro 5G.

“We are glad that through the long-term partnership with Google, TECNO has been providing our users with the latest Android system to bring them extraordinary using experiences. The TECNO CAMON 19 Pro (5G) with Android 13 Beta will definitely allow our users to be among the first to access new features and bring them pleasures”, said Stephen HA, Vice President of TRANSSION and GM of TECNO Mobile.

With the "Stop At Nothing" spirit, TECNO aims to encourage users to explore unlimited possibilities dedicated to making their users the early adopters of the latest system.

Android 13 has key optimizations including:

● Stricter Notification Permission - Privacy and user trust are core principles of Android products. To give users control over the notifications they want to follow, Android 13 introduces POST_NOTIFICATIONS — new runtime permission. This means that apps need to request notification permissions from users before posting notifications.

● Color vector fonts - Android 13 adds rendering support for COLR version 1 (spec, intro video) fonts and updates the system emoji to the COLRv1 format. COLRv1 is a new, highly compact, font format that renders quickly and crisply at any size. COLRv1 can be adopted for the app starting in Developer Preview 2.

● Convenient Text Conversion API - Android 13 allows apps to call the new text conversion API, which will make it easier for users to find the content they need faster and easier.

● Upgraded Bluetooth LE Audio - With Low Energy (LE) audio, users would be able to share and broadcast their audio to others or subscribe to public broadcasts for information, entertainment, and more, while seamlessly switching between different use cases.