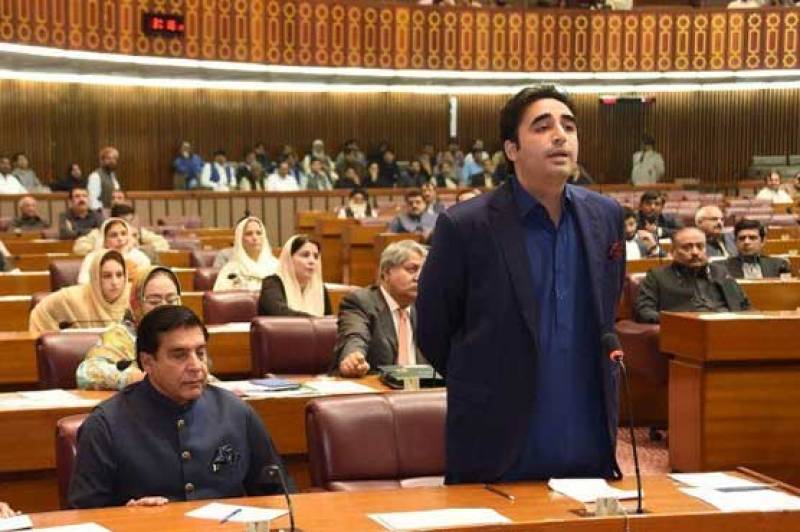 Pakistan People’s Party (PPP) Chairman Bilawal Bhutto Zardari Friday said that both the budget and the budget session of the PTI-led government are illegal.

He expressed these views while addressing the session of the National Assembly, which was being conducted under the chairmanship of National Assembly’s Speaker Asad Qaiser. Bilawal said that it seems the government is playing the role of the Opposition instead of running the country.

Speaking about the budget presented by the government, Bilawal said the masses are aware of the fact that “claims of 4% growth are based on lies.”

“I think both this budget and the budget session are illegal,” he said, adding that ever since the government has taken over, no new National Finance Commission (NFC) award has been given to provinces.

Bilawal said that contrary to the federal government’s promise with the Sindh government that there would be no discharge of water from the TP-Link Canal, water was released. “If the province’s Chief Minister Syed Murad Ali Shah will not protest against ‘injustices’ being done to the province, then who else will. Donald Trump?,” he asked.

The PPP chairman said it was strange that when the Sindh government demanded the province’s share under the NFC Award, it was accused of playing the ‘Sindh Card’.

“This is not only Sindh. The truth of the matter is that the Centre is usurping the rights of all the provinces,” he commented.

Shedding light on the growing inflation in the country, Bilawal said that the PTI government has “abandoned people and left them in a destitute condition.” He said that people will never forgive the government for further pushing them below the poverty line.

“If the budget raises petrol, gas, and electricity prices, then every Pakistani has to bear the burden of the government’s incompetence,” said Bilawal, adding that had there been economic growth, so many people would not be unemployed.

“The prime minister had promised to grant 10 million jobs to people, but on the contrary, even those who were previously employed have now been rendered jobless,” the PPP chairman said.