India - US trade and how it will impact Kashmir 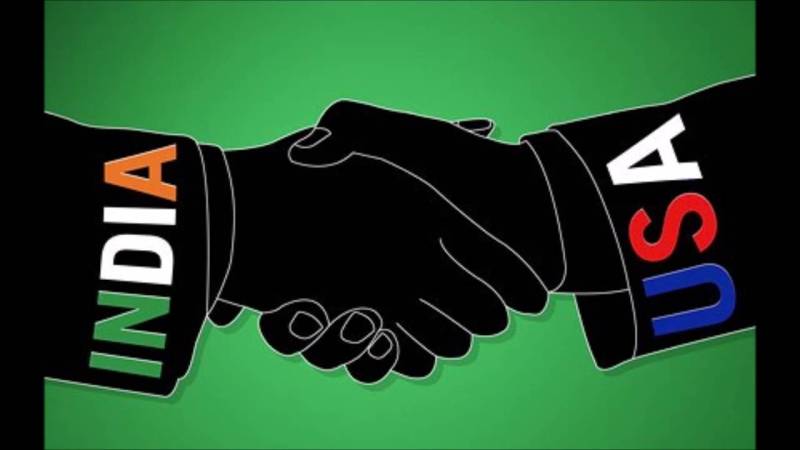 While the hullabaloo over Modi’s rise on the international stage has been on the verge of being a circus, with all the elephants of trade on parade, it is a distraction from the recent collective beating of chests being put on by joint Naval forces of India, the United States and Japan in the South China Sea, called Exercise Malabar, an annual event since 1992 bilaterally between India and the U.S. Japan joined just last year.

It has been held in previous years in the Indian Ocean and other areas closer to home for India. But the hegemonic ambitions of this odd couple now reflects the deepening commitment the two countries have made to sharing a strategic military alignment against China for dominance in South and Southeast Asia.

A 2011 report to Congress by the U.S. Department of Defense on U.S.-India Security Cooperation explains clearly the focus and intensity of military cooperation between the two countries.

However non-aligned India’s posture would pretend to be, if that’s not an alignment, I don’t know what is. The sharing of “our most advanced technologies,” of military tactics and strategy, is vital to security and leads to sensitivities across the board that seriously compromise any supposed “non-aligned” status.

In any war, a side has already been chosen. In any dispute, the U.S. can be expected to have India’s back.

It seems simple enough, but it isn’t, however, because neither country is at war with China, and other relationships, primarily economic, have been engaged that greatly restrain such an impulse.

The weight of those relationships is therefore important in determining how that risk is viewed,As stated in my previous article, Reflections on Modi's Visit to the U.S: What's in it for Kashmir?, U.S. neocons have long had both Russia and China in their sights. Both countries represent a threat to America's economic and political dominance in the world.

At the moment, that alliance has been viewed as too strong for the war machine to take on either country directly. But the agenda follows policy long established by neocons like Robert Kagan, William Kristol, Dick Cheney and John Bolton (now prospective Secretary of State during Trump administration) and others who, through Project for a New American Century, for years advocated confrontation rather than accommodation and have continued to be the leading neocons who have had the ear of successive administrations.

“Thanks to the greed of US corporations that boosted their profits by outsourcing their production to China,” former Under Secretary for President Ronald Reagan Paul Craig Roberts writes, “China is modernized many decades before the neocons thought possible. China’s military forces are modernized with Russian weapons technology. New Chinese missiles make the vaunted US Navy and its aircraft carriers obsolete.”

India belongs to the BRICS financial group of countries which includes Brazil, Russia, India, China, and South Africa. They now have upwards of $100 billion to invest in developing countries in direct competition with the World Bank and IMF through their New Development Bank.

They are developing systems that compete with SWIFT, the mechanism for identifying funds transfers.

Since 2012, BRICS have also been developing an optical fiber submarine communications cable to carry telecommunications among BRICS countries called the BRICS cable.

BRICS is naturally seen as a threat to the existing global market system and the dominance of the U.S. dollar. The opportunity for manipulation of various markets that has been in the hands of the World Bank and IMF has more often than not served the global political ends of the world powers at the expense of countries that were less than cooperative.

The IMF had in fact warned Britain before it held referendum this year that exiting the European Union would have negative financial consequences, saying in other words that its willingness to loan money might be affected.

India’s growing alliance with the U.S. seems strange in historical context, given the fact that China is, or should I say, has been, India’s largest global trading partner.

Trade between the two countries had increased from $2 billion in 2001 to $70 billion in 2014, and the current vision is to continue growing. So India’s actions in the South China Sea seem to run somewhat counter to its interests. India’s need for Chinese-made goods far surpasses China’s need for Indian products, leaving a substantial deficit.

Indian administration officials have not responded to questions about this seeming conflict in India’s agenda and what appearances suggest, but officials have pointed out that “the warmth in Washington doesn’t necessarily mean a chill in Beijing.” Nevertheless, India wants to pursue its long-held belief that China is an existential threat and needs to be balanced by other friends in high places.

The weight of U.S. cooperation with India is not insignificant. Business Insider reports that “Members of the US-India Business Council have already invested $28 billion in India since September 2014 and investment of another $45 billion is in the pipeline,” as Council Chairman John Chambers told Prime Minister Narendra Modi when the two met in Washington during the latter’s visit to the nations Capitol.

US trade with India has actually overtaken Indian trade with China and now stands at $100 billion per year. But that’s just a nickel in the tip jar on top of the Steinway.

In a formal statement by U.S. Under Secretary of State Catherine Novelli on April 15, 2016 points out that “President Obama and Prime Minister Modi have committed to raising our bilateral trade another five-fold to $500 billion dollars.”

India suffers a trade deficit with China that was close to $50 billion in 2014-15, while enjoying a $20 billion surplus with the U.S.

India is losing big money to China while gaining some of it back from the U.S. It would seem that India intends to maintain good relations with China but sees more substantial benefits in developing ties with the U.S.

There’s no question that Prime Minister Modi has hegemonic notions of his own. His policies toward Kashmir are a clear example. No doubt, he has no interest in trading India’s new-found independence and strength for second-class colony status, whether it be the world’s largest wage slave, labor camp or not.

cheap labor and handsome profits. The cost of corporate greed is that human rights will always take a back seat. It is clear from a report in The Guardian, dated November 8, 2016, entitled, “India’s crackdown in Kashmir: is this the world’s first mass blinding.”

It stated, “A bloody summer of protest in Kashmir has been met with a ruthless response from Indian security forces, who fired hundreds of thousands of metal pellets into crowds of civilians, leaving hundreds blinded.”

Trade and commercial deals are important but not at the expense of the high moral ground American exceptionalism has always claimed. Moral values and human rights are the very essence of even being called civilized.

India has a long history of attempting to remain non-aligned, and certainly her recent history as a British colony has not been forgotten. But commitments militarily as well as financially with the U.S. are shifting the long-held balance rather awkwardly off scale. Don’t look for much moralizing from U.S. officials on the problem of Kashmir anytime soon, given the new realities within the Beltway in Washington, D.C.

Trade, however, will have a bonus in the long run. History tells us that international investment is never safe in a conflict zone. Troubles on the home front are never good for business.

Oil pipelines can be blown up, interrupting international markets and commerce, power outages make it impossible for almost anyone to do business, and terror itself is very costly to the economy when people are afraid to go out and buy things and tourism comes to a halt.

India’s penchant to present her perspective before the international community ignores fundamental root causes in the abuse of the rights of Kashmiris, and the risk of nuclear confrontation itself shrinks all other complaints to silly whining.

Dr. Madeline Albright, former US Secretary of State was right when she said on July 1998 “I have spent my entire life looking at the issue (Kashmir) and that is the basic issue between these two countries.” So, resolving the dispute over Kashmir will lead to peace in the region which must eventually be seen as vital to maintaining a stable market and global trade.

Companies that have billions of dollars on the line will do much to influence policies that will protect their stockholders.

So trade and commerce between India and the U.S. as well as other countries is a good thing, and will likely provide the necessary leverage to resolve the Kashmir issue peacefully. In this context it is significant to note that when India and Pakistan were at the brink of a nuclear confrontation in 2002, Thomas Freedman wrote in the New York Times on August 11, 2002, "...it was the influence of General Electric, not General Powell, that did the trick."