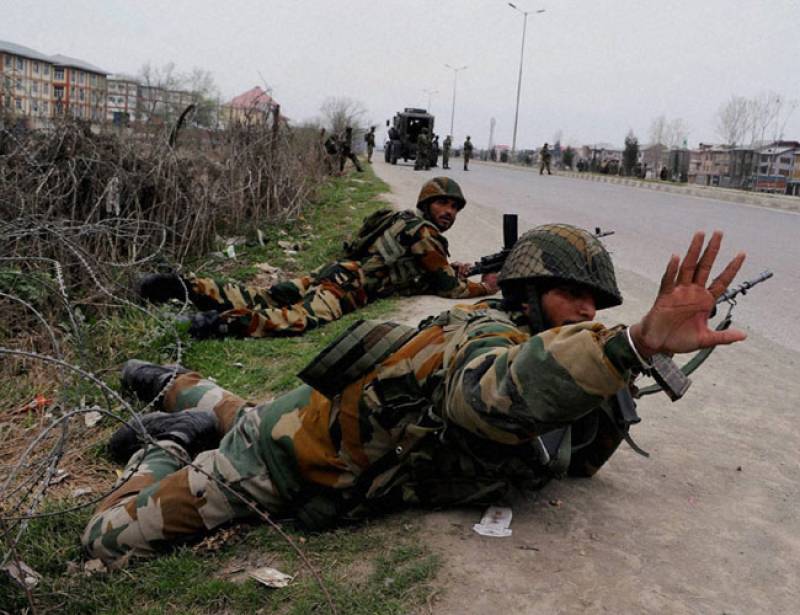 SRINAGAR - Update 2: Indian officials raised the number of the killed Indian soldiers to 17. Over a dozen were said to be injured. Initially, nine personnel were reported dead.

Update 1: Indian media reported that all four attackers involved in attack on Uri brigade headquarters were killed by the Indian forces. A search operation was still underway at the base.

Original Story: At least nine Indian soldiers were Sunday pronounced as dead while 18 others injured when a group of four insurgents attacked an Indian army base in Occupied Kashmir's Uri sector.

According to Indian media, Uri brigade headquarters is India's major infantry base in Kashmir, located some 100 km away from Srinagar. Hundreds of Indian soldiers and top military officials are stationed there.

Army spokesman Colonel S D Goswami confirmed that the attackers entered a base of an infantry battalion close to the Line of Control just before dawn and set many barracks on fire.

Several explosions and gunshots were also heard from inside the Indian base. Smoke could also be seen rising from the base.

Media reports said that personnel of army’s special forces were also airdropped in Uri sector to battle the attackers. As many as three choppers were also sent to Uri sector to assist the forces.

In the wake of the attack, Indian Home Minister Rajnath Singh postponed his visit to Russia and the United States. He also telephoned to Jammu and Kashmir Chief Minister Mehbooba Mufti to inquire about the attack.

The attack just a week after the Wall Street Journal, in a report, said that Indian-held Kashmir could witness an intensified armed struggle against Indian forces as the continuous protests and curfews followed by the killing of Burhan Wani, a pro-freedom fighter, entered third month.

"Months of protests that were triggered by the killing of a young Kashmiri freedom fighter are stoking ‘long smoldering’ anger among the Kashmiri people of the Indian-held valley," the American newspaper said.

The death of Wani “touched a nerve, particularly in rural areas, where he used social media and personal outreach to become a sort of folk hero.”

“This summer’s protests have swept up not just urban centers but apple growing hamlets and remote mountain villages too, indicating the breadth of Mr Wani’s appeal,” the report added.

During the protests, in addition to the death of more than 70 people, thousands of others have been wounded in daily clashes between security forces and protests who are now demanding freedom. Indian forces have used pellet guns, shooting directly into crowds, which has hundreds of people at risk of losing their eyesight.

According to the report efforts by New Delhi to calm the situation “have foundered as the violence stretches into a third month, fueling resentment and raising the prospect of a return to armed struggle”.

Muslim Kashmiri leaders have refused to negotiate with Indian politicians who visited Srinagar earlier this month, saying they would not meet the Indian delegation as they were not ready to discuss the issue of Kashmiri self-determination.