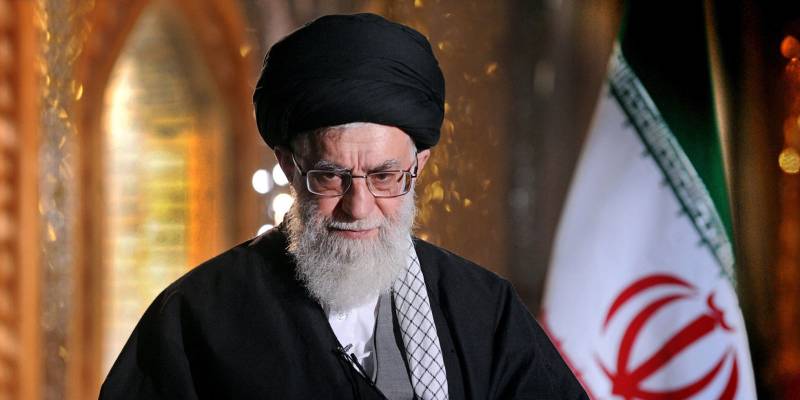 Safeguarding Iran’s regional expansionist interests have recently been articulated as Pakistan’s national interest. Such Stephen Bannons and Kellyanne Conways of Pakistan have created their own alternate realities and post-truths. They have invoked the notion of ‘neutrality’ so conveniently as if the earthlings live in a utopia where realpolitik never existed. They promised, more often implicitly, that Pakistan is a hermit state with no concern for what’s happening on its border and which of the neighbors are teaming up against it or being disrupted by the global bullies.

To such strategists, diplomats and activists shouting against Islamabad’s membership of Islamic militaries coalition against terrorism, which the US and the West have been demanding for over half a decade, sitting on the fence is the best option for Pakistan. All in the wake of Narendra Modi’s campaign to declare Pakistan breeding ground of terrorism! Their supreme concern is that such a bloc may hurt Iran’s proxies in Yemen, which have used anything from AK-47 to ballistic missiles to overpower the military, the government, and the people. They are in the league of Taliban, Hezbollah, and Daesh.

In the normal world, realpolitik is the name of the game. Alliances, coalition, pledges and secret negotiations are the tools states use to serve their respective national interests. Abject neutrality is a farce, a deception or posturing when Iran and India have an undeniable convergence of interests ranging from geo-economics to geostrategy to regional stewardship.

Iran’s handing over of Chabahar to India, which is a frontline ally of what Tehran calls the Great Satan, is aimed at not only helping Delhi at facilitating her to compete with China’s economic and geopolitical influence in Central Asia and Afghanistan but also encircling Pakistan.

In the larger geostrategic framework, the Chabahar port with multi-purpose container cargo terminals and docking facilities will sure serve as a naval base. Neither side acknowledges ambitious plans for an Indian naval base on the mouth of Strait of Hormuz. India has already developed intelligence outposts in Iran, including a consulate in Zahedan and another in Bandar Abbas, which will permit India to monitor ship movements in the Persian Gulf. The arrest of Indian spy – Kulbushan Yadav in Baluchistan leaves little to the imagination as to how far Iran and India have already gone against Pakistan and China’s economic corridor to the Arabian Sea.

Iran is giving India easier access to Afghanistan, which is linking Chabahar to Zaranj with a railways track. The 218 km long Zaranj-Delaram highway now links Afghanistan to the Iranian port of Chabahar as part of the Afghan circular road connecting Herat, Mazar-e-Sharif, Kabul and Kandahar.

Back in 1983, Iman Khomeini nodded for Iran-India coalition, resulting in the formation of a joint commission that became the basis for bilateral defense and military ties.

Back in 1983, Iman Khomeini nodded for Iran-India coalition, resulting in the formation of a joint commission that became the basis for bilateral defense and military ties. Iran reportedly solicited Indian assistance in 1993 to help develop new batteries for three Kilo-class submarines it had purchased from Russia. The submarine batteries provided by the Russians were ill-suited to the warm waters of the Gulf, and India possessed substantial experience operating Kilo-class submarines in warm water.

Iran has been receiving Indian assistance for other upgrades to Russian-supplied military hardware, which includes MiG-29 fighters, warships, submarines, missile technology, and tanks. Due to close watch during sanction on Iran, Indian assistance was least mentioned in the bilateral press with Tehran claiming credit for ingenious capabilities to upgrade weapon systems and even innovate (basically repackage and rename Russian technology or its Indian version).

The Iranian and Indian leadership never mention the defense pact both signed in January 2003, resulting from a memorandum of understanding signed in 2001. Remember, the same year Iran’s then-president Muhammad Khatami was the guest of honor at India’s Republic Day parade.

“The Republic of India and the Islamic Republic of Iran are resolved to exploit the full potential of the bilateral relationship in the interest of the people of the two countries and of regional peace and stability… with a vision of a strategic partnership for a more stable, secure and prosperous region and for enhanced regional and global cooperation… Explore opportunities for cooperation in defense in agreed areas, including training and exchange of visits.”

The Jane’s Defense Weekly then wrote that the Indo-Iran “pact had shifted the strategic balance.” Though many global observers then read the pact as an attempt to encircle pro-Arab Pakistan, in post-sanction period India will not only eye at providing military hardware and training to Iranian troops but also is obliged to provide bases in case of a conflict.

Though the text of the pact remains closely guarded under 'top secret category' even 14 years after its signing, some details have emerged and bilateral defense ties have given clues to its contours.

To appease Iranian public, India boasts being home to the second largest population of Shias in the world with many ancestral ties in Iran. The number of India’s Shia Muslims is estimated to be between 16-24 million, says a Pew Research report as of 2009. Shia Muslims are part of politics, bureaucracy and security forces in India.

India and Iran’s strategic relationship has significantly put in place military and energy deals estimated over $25 billion. The wide-ranging cooperation involving all three military services is quite a turnaround in the existing strategic situation in the Middle East.

Both have the right to use each other’s military bases for combat operations in case either party is in a state of war. India has also agreed to assist in the development of Iranian port facilities with the construction of road and rail links in Iran. The two countries, along with Russia, have talked of creating a Russo-Iranian-Indian transport corridor, a trade route.

Iran is also buying an unspecified number of Upgraded Support Fledermaus radar systems from an Indian state-owned company. The deal alone is worth $1 billion and marks the first major defense agreement between New Delhi and Tehran. The upgraded Super Fledermaus is monopulse radar used in 35-mm air defense batteries and designed to detect low-flying objects, such as unmanned air vehicles. The digital system contains a built-in simulator as well as a signal jammer. India could consider selling light helicopters and jet trainer aircraft. Demand from post-sanction Iran is set to provide impetus to Modi’s make-in-India ambitions. However, the nuclear deal signed last year maintains five more years of the conventional arms embargo and missile restrictions lasting eight more years if Tehran chooses to respect them.

While Tehran may have limited open access to most modern military technology, it has perfected other means of exporting the revolution. Though posturing to be an outfit aimed to bleed Israel, Hezbollah has worked wonders for Iran’s interests earlier in Lebanon and now in Syria. Iraq has its own unending supply of mercenary militias despite a highly favorable but thoroughly incompetent government in Baghdad.

It has been able to exploit discontent in Yemen’s Houthi militia to its unfair advantage by training, arming and funding them to the teeth. Not only the militants have access to sufficient supply of ballistic missiles but also propaganda tools such as own television channel. Tehran intervened in Yemen through proxies to install a favorable government in its bid to encircle Saudi Arabia and the Gulf nation just like it helps India against Pakistan.

For its Syria misadventure alone, Iran reportedly has recruited thousands of Shiite militants from Gilgit-Baltistan to Kurram Agency and Jhang to Karachi. Official sources place the number close to 20,000. Tehran keeps no secret of Pakistani extremists fighting to save Assad’s regime. The Pakistan militants division – Zainabiyoun – is often credited ‘martyrdoms’ and ‘battlefield victories’. The dead are buried with their funeral held publically, and photos and city of origin printed on posters and banners.

If its deep security ties with India were not enough to explain Iran’s neutrality towards Pakistan, indoctrination of a ‘friendly’ country’s population and using it as cannon fodder for own expansionist, the disruptive design should do.

Pakistan can only consider neutrality if Iran sets a precedent. Since 1979, Tehran has been hostile to Pakistan despite Islamabad providing access to Karachi port during its war with Iraq. General Zia did so while angering Pakistan’s allies in the Gulf region. Since the war ended, Tehran has competed against Islamabad for influence in Afghanistan.

On the other hand, Saudi Arabia along with Turkey stood by Pakistan since the times of the freedom movement. Pakistan also received financial and political support from Arab nations in its pursuit of nuclear weapons. Zulfiqar Ali Bhutto could manage to accrue $500 million in 1974 (which amount to $1.5 billion today) from Saudi Arabia alone for the nuclear program. However, the otherwise friendly Shah of Iran ignored ZAB’s request. It was he who pledged with the Arabs for their security in the wake of an external threat (Israel mainly) if they helped Pakistan achieve nuclear capability. The commitment made then was upheld by his successors General Ziaul Haq, Benazir Bhutto, Nawaz Sharif and Pervez Musharraf. Thus, Islamabad can’t abandon time-tested allies for India-favoring Iran at the crunch time.

Though Iran’s parliament has yet to hold an open debate on matters of security and foreign policy, it has successfully been able to create a bi-partisan lobby for interests. While Asif Ali Zardari has been the most extrovert proponent of Iran’s interest when in government, the PTI leadership has shown exceptional disregard for the country’s strategic imperatives. Now its Iran advocates refer to the parliamentary resolution being a hurdle in General Raheel Sharif’s appointment of commander-in-chief of Saudi-initiated 41-nation military coalition.

The fact, however, is that the parliamentary resolution did bar Pakistan from sending troops inside Yemen but never forbade from joining any military coalition. The text of the resolution is a public in Urdu and English languages. Pakistan’s constitution, unlike Switzerland’s, does not bar her from joining any military or geopolitical alliances. While the impoverished Arabian state has been struggling for statehood since 1993, majority of today’s Yemen-lovers never mentioned it even in passing until President Hadi sought Saudi help against Houthis.

This week, frustration further spiked in Iran after Tunisia and Algeria refuted its claim of forming a military coalition with North African Arab states against terrorism. Iran’s media has been upbeat about the ‘prospects’, which both Algiers and Tunis have contradicted. The Persians will further amplify their rhetoric of ‘liberating the oppressed’ in the months prior to the election campaign. And, Pakistan will feel the heat too.