SHARJAH - Through its Guest of Honour (GoH) programme at the Sharjah Children’s Reading Festival (SCRF) every year, the UAE Board on Books for Young People (UAEBBY) has been furthering its efforts to enrich the local literary and cultural landscape through international exchange with national sections of the International Board on Books for Young People (IBBY) around the world. IBBY Italy is under the spotlight at SCRF 2018 and rolled out the first few activities part of the GoH cultural programme Yesterday.

The highlight of the day was a discussion titled ‘The Children’s Book Culture in Italy’ featuring Dr Marcella Terrusi, Representative of the IBBY Italy, and award-winning author of the first international critique on silent books and researcher on ‘silent’ or wordless books and children’s literature; Elena Pasoli, Manager of Bologna Children’s Book Fair; children’s book expert, Grazia Gotti, and Emirati author and illustrator, Alia Al Shamsi.

Much of the discussion revolved around how IBBY Italy, one of the first sections of the international organisation since its establishment in 1953 and reformation in 2003 with the support of Bologna University and a central role played by Gotti, has supported reading promotion initiatives with a particular attention to remote or disadvantaged areas, alongside promoting the work of the best Italian authors, illustrators, translators and editors, by nominating them to the prestigious international awards such as the Hans Christian Andersen Award, the IBBY Honour List, the Biennial of Illustrations of Bratislava and the Astrid Lindgren Memorial Award. 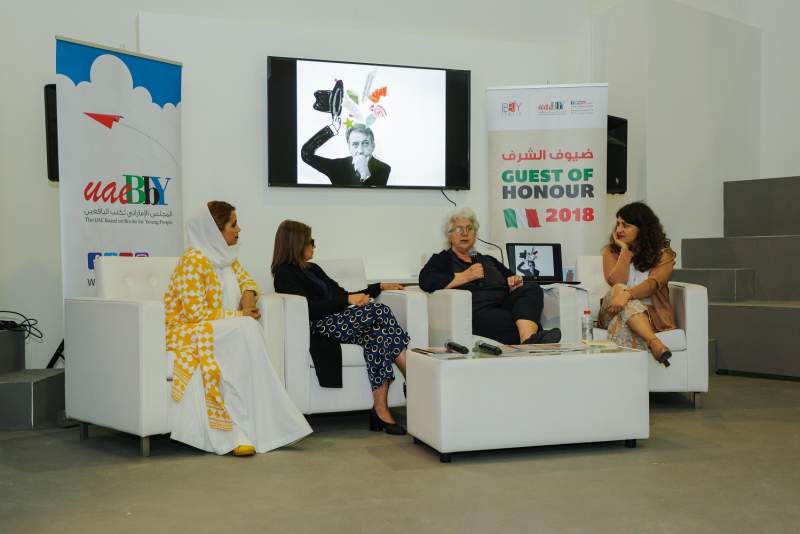 Highlighting the importance of illustrations in children’s books, irrespective of the era they were written in, Gotti said: “I would like to mention the Adventures of Pinocchio, which wasn’t a literary novel but just a tale in a children’s magazine. It took Italy time to realize that it was seeing a masterpiece in the making. There was no king or queen, just a wooden doll with a long nose. His iconic illustrations depict the passage of time, technological developments, the transformation of images from black and white to colour, and so on. In essence, what I am saying is, the language of images is as old and culturally important as the written novel itself.”

“We have met some close friends and made some new ones in just one day here in Sharjah. The introduction of IBBY Italy in the UAE is the start of a new era of cultural collaboration between the two nations, and we have a lot of work to do together. To me this story is an endless story; it is a story of hope,” she added.

Elena Pasoli shed light on the role of IBBY Italy in helping Bologna Book Fair become one of the most prominent literary events for children in the western world. She said: “Bologna Book Fair was established in 1964. The two organisations, Bologna Book Fair and IBBY Italy are somehow sisters. We have learned a lot from them; the fact that they were involved with the fair from the very beginning helped us understand the importance of a dialogue between cultures. Today, the Bologna Children’s Book Fair is not just about the business of selling and exchanging copyrights. It is a meeting place for ideas, for the birth of new projects, and a lot more about the cultural side of literature and society.”

Terrusi too highlighted the importance of pictures in children’s books and took the audience through a series of illustrations which were contributed by leading Italian artists to IBBY Italy. “Through claims like ‘with books you grow up’, by authors like Beatrice Masini who is part of the Italian delegation to the UAE this year helped, or ‘with books we grow up free’, IBBY Italy express itself and reach out to the international community,” she said.

Terrusi added: “The central idea of IBBY Italy is to build bridges between cultures, a goal we share with the UAEBBY, to build tools and exchange stories in order to build a new world. Being the guest of honour in Sharjah is historic for us.”

Al Shamsi said she was brought up in a multicultural environment from an early age when her mother of Italian origin gave her a copy of Pinocchio to read in Arabic.

She said: “We see silent books as a bridge between cultures as they encourage every child to celebrate their individual interpretation and tell the stories as they see them. Currently, we are working on stories that have their basis in the Arabic heritage and at the same time appeal to young sensibilities. I thank the UAEBBY for all their efforts. I hope they will be able to contribute more effectively to the silent book's landscape locally and regionally by encouraging more authors and illustrators to create content in this genre of literature.” 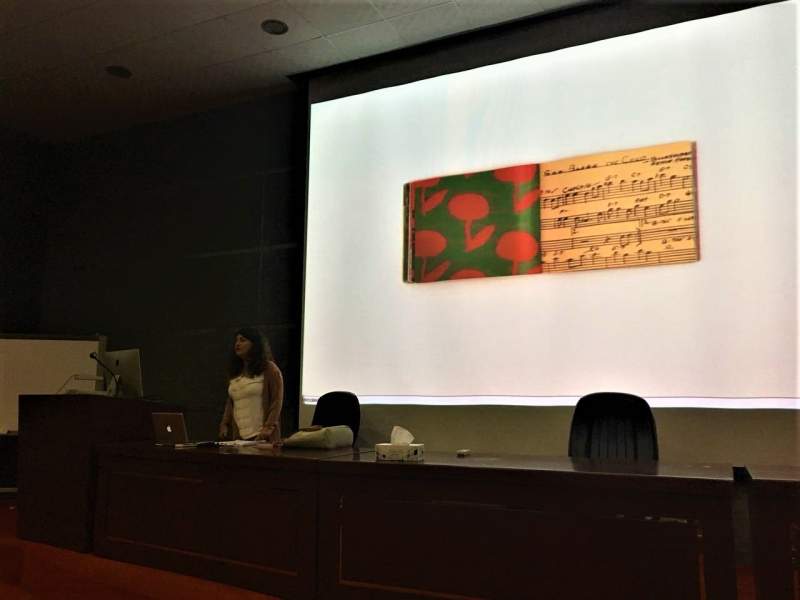 Another activity by IBBY Italy as part of the GoH programme was a lecture on silent books by Dr Terrusi that was delivered to students of the College of Fine Arts and Design at the University of Sharjah.

She said: “I had the honour and pleasure of being invited to the University of Sharjah. I was amazed by the architecture of the university – it really tells me something about the future of education and the new direction in which the world is going. I come from Bologna where the University of the west was born, so it was truly emotional for me to be able to see how much the institution has evolved.

“The students I addressed were very interested in the subject of silent books, and what I did was give these students a little taste of what I do with bigger communities during wordless book reading sessions as a researcher of wordless books.”

Upon being asked how does one read a wordless book, Terrusi remarked: “The physical book gives you direction. When you read what’s on a page and create your hypothesis, you know if you are right when you turn the page. You fill gaps in silent books with your own imagination, which is not much different from what you do in case of the written novel. Most importantly, what a wordless book does is change the hierarchy among readers. This is what I loved about my lecture this afternoon. Everyone contributed to their impressions and ideas, we co-constructed the meaning of several books that define the modern genre Italian wordless books.”

The UAEBBY Guest of Honour programme is organised this year in partnership with the Italian General Consulate in the UAE, and ICE School Dubai.

In hosting IBBY Italy as Guests of Honour at SCRF, the UAEBBY encourages new relationships with different sections of IBBY, inspires local talent to explore new literary cultures, and promotes a culture of reading across the UAE’s many diverse communities.

The UAEBBY’s “Guest of Honour” initiative, which began in 2015 seeks to cultivate new relationships with different IBBY sections, allow local talent to learn from the experience of international experts, and encourage reading among UAE’s diverse communities. As it is known, the UAE is a multicultural country and this initiative hopes to embody this spirit.

In April of each year, during the Sharjah Children’s Reading Festival, the UAEBBY hosts a different IBBY section. As a part of their visit, they have their own section in the UAEBBY’s stand to display their work and do readings, workshops, and more. The guests include a writer, illustrator, and representative of the IBBY section.

UAEBBY is the national branch of the International Board on Books for Young People (IBBY). Operating in more than 77 countries, IBBY is the main board based in Switzerland and founded in 1953. The organisation is an international network of institutions and individuals from around the world who are committed to promoting and encouraging the culture of reading and bringing children and books together.