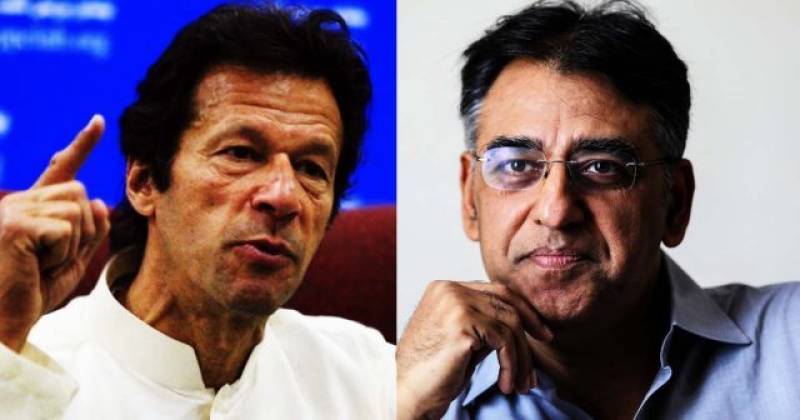 LAHORE - Finance Minister Asad Umar has decided to step down amid reports of a federal cabinet reshuffle and an International Monetary Fund (IMF) deal with Pakistan on Thursday (yesterday).

“As part of a cabinet reshuffle PM [Imran] desired that I take the energy minister portfolio instead of finance. However, I have obtained his consent to not take any cabinet position. I strongly believe @ImranKhanPTI is the best hope for Pakistan and inshallah will make a Naya Pakistan,” he said in a tweet.

As part of a cabinet reshuffle PM desired that I take the energy minister portfolio instead of finance. However, I have obtained his consent to not take any cabinet position. I strongly believe @ImranKhanPTI is the best hope for Pakistan and inshallah will make a naya pakistan

Later, during a news conference, Umar confirmed that he had indeed stepped down as the finance minister but this did not mean he would stop supporting the prime minister’s vision of a Naya Pakistan.

Soon, After the resignation of Finance Minister became a trend on Twitter and many leading politicians, celebrities, civilians and journalists reacted to the matter in their tweets:

No need for revenge. Just sit back and wait. Those who hurt you will eventually screw themselves up and if you’re lucky, God will let you watch.

Many colleagues criticised @Asad_Umar in cabinet meeting on April 16th and they were sure finance minister will be changed pic.twitter.com/263J7aU2JN

It’s not your failure , isn’t it the failure of the government ?

If PTI’s and Asad Umer’s policies were so good, and the problems were from PMLN government,then why was he asked to step down.This is an admission by IK that his polices have created an economic crisis in Pakistan. the real problem is not Asad. It is the PM.@pmln_org @PTIofficial https://t.co/GYIhL9qPue

Twitterati you are on fire today. Want to retweet all the tweets.
👌#AsadUmar

For 8 years Imran khan presented Asad Umar as the answer to Pakistan’s economic woes... in 8 months, Imran khan is not satisfied with his own answer..

In olden days when a minister is not performing well, the minister was replaced with yet another ministry while @Asad_Umar did the most respectable thing, his area of expertise wasnt in the offered ministry by the PM so he resigned, its that simple #AsadUmar

The msg is loud & clear: No matter how big of a name u r in the party, no matter how close u r to PM Imran Khan, if u can't deliver as expected, U GO! PAKISTAN se ziada important koi nahi. BRAVO to #AsadUmar & soon othr cabinet members for being graceful abt this.

Attack in #Ormara #Balochistan is definitely a bigger news than #AsadUmar stepping down as #FinanceMinister but media would probably ignore it while doing newsprograms tonight. My request: don’t neglect them. Talk abt solutions, push for betterment. Innocent blood awaits justice

In cricketing terms, Asad Umar was batting too slow, making no runs and captain feared he might cause several run outs. So, Asad was recalled as retired hurt.

Later on Thursday's (yesterday) evening, A notification issued by the PM office said Fawad Chaudhry has been allocated the portfolio of minister for science and technology while Ghulam Sarwar Khan would serve as the minister for aviation.

Moreover, Ijaz Ahmed Shah has been notified as Minister for Interior; the portfolio was earlier retained by Prime Minister Imran Khan.

The notification came hours after Asad Umar stepped down as Finance Minister, refusing to be allocated the portfolio of energy but posing trust in Imran Khan for his Naya Pakistan; Abdul Hafeez Sheikh has now been appointed as the adviser on finance.

What is your say on this? Let us know in the comments below.