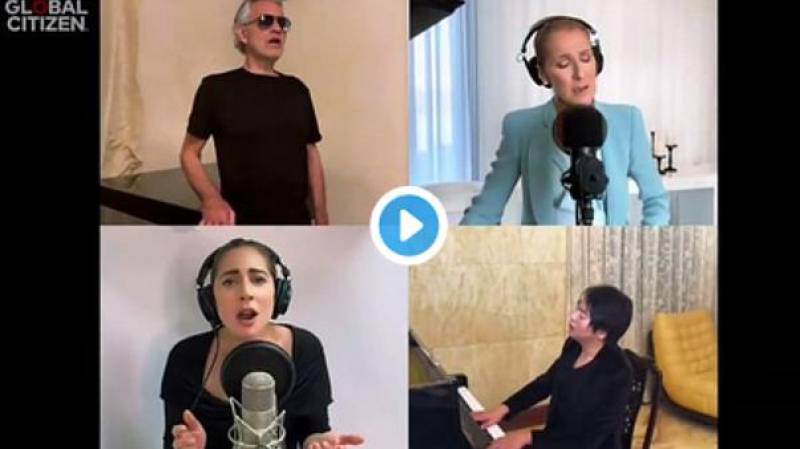 NEW YORK – A cadre of renowned musicians on Saturday night helped raise more than $127 million for the World Health Organization (WHO), a Geneva-based U.N. specialized agency, which is spearheading the fight against the coronavirus pandemic.

The big fundraising haul came via “One World: Together At Home,” an 8-hour virtual concert organized by international advocacy group Global Citizen and superstar Lady Gaga and broadcast around the globe to celebrate the healthcare workers on the frontlines of the deadly virus and support WHO’s COVID-19 Solidarity Response Fund.

Lady Gaga, promised and delivered a “love letter to the world”, featuring an extraordinary multi-generational line up of performers, including the Rolling Stones, Stevie Wonder, Billie Eilish, Paul McCartney, Beyonce, John Legend, Lizzo, Jennifer Hudson, Taylor Swift and dozens of others, that delivered eight hours of music interwoven with testimony from workers across the world, and the communities that are supporting them in the battle against COVID-19.

More than 2.3 million reported cases of COVID-19, the disease caused by the novel coronavirus, and roughly 161,000 deaths caused by it were reported as of Sunday morning, according to a Johns Hopkins University database.

“We face a crisis unlike any other. To overcome it, we must unite”, said the UN Secretary-General António Guterres, in a video message. “Tonight, through the universal language of music, we salute the bravery and sacrifice of health heroes and others. As we do so, let’s remember the most vulnerable.”

Amidst the intimate and heart-felt performances recorded by artists mostly sheltering in place in their own homes, the UN chief took the opportunity to reiterate his call for a global ceasefire in bloody conflicts across the world, “to focus on our common enemy — the virus.”

He pointedly thanked the viewers, performers, organizers, scientists and sponsors of the global event, for their support of the World Health Organization (WHO) and other humanitarian agencies, which are leading the multilateral effort to reverse the tide of the COVID-19 pandemic.

“Together, we will defeat this virus and rebuild a fairer world — as united global citizens and united nations”, Guterres said.

Speaking earlier in the night, the President of the UN General Assembly, Tijjani Muhammad-Bande, told the millions of viewers online that in the 75 years since the founding the UN, “solidarity has been our first and best line of defence.”

“Today, we stand together as?one world,?to thank our healthcare workers and frontline essential community workers. You embody the very best of humanity. By caring for the most vulnerable in our communities, often at great personal sacrifice, you are protecting?everyone, everywhere. You are at the forefront, weathering this storm. Remember that we are with you.”

UN Deputy Secretary-General Amina Mohammed, told the global audience that by being at home, we were “helping our brave health workers”, and echoing the theme of the UN drive towards the 2030 Sustainable Development Goals (SDGs), she said it was key to “leave no one behind and accelerate in our race to find a vaccine.”

“After all, COVID-19 anywhere is a threat to people everywhere”, she said. “Let’s keep fighting together to stop the pandemic, support the most vulnerable and build back better, in solidarity.”

In a world where so many are now living out their lives confined to home, the unprecedented sight of so many of the world’s top singers and entertainers doing the same, made the intimacy and humility on offer in their words and music, all the more powerful, and genuine.

The only comparable event, in support of efforts to improve famine relief across the world in the mid-1980s through Live Aid, was a carnival of stadium rock and pop, that would be unthinkable in the coronavirus era.

Rounding off the night, the WHO chief, Tedros Adhanom Ghebreyesus, took the Twitter, describing the final quartet (led off of course, by Lady Gaga herself, and surprise guest singer Celine Dion), as “a beautiful finale to an important concert: One world, #TogetherAtHome, which brought solidarity, compassion, artistry and yes, humour, to millions of people, over many hours and time zones.”

“The World Health Organization is committed to defeating the coronavirus pandemic with science and public health measures, and supporting the health workers who are on the frontlines of the response,” he said in an earlier statement.

“We may have to be apart physically for a while, but we can still come together virtually to enjoy great music,” added the WHO chief. “The ‘One World: Together At Home’ concert represents a powerful show of solidarity against a common threat.”