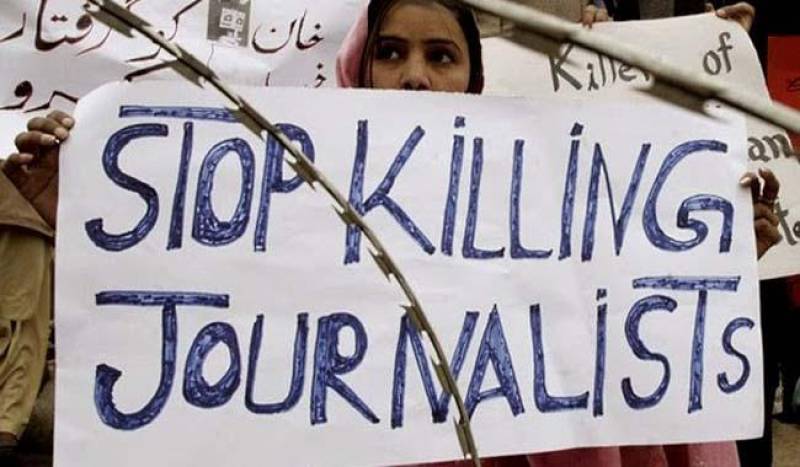 PARIS - As many as 74 journalists including citizens journalists and media contributors have been killed around the world in 2016 while doing their job, Reporters Without Borders said on Monday.

According to 2016 roundup of the press freedom group, 19 were killed in Syria alone, followed by 10 in Afghanistan, nine in Mexico and five in Iraq.

Almost all of those killed were locally-based journalists.

Although it was fewer than the 67 killed in 2015, the group put the decrease down to "the fact that many journalists have fled countries that became too dangerous, especially Syria, Iraq, Libya, Yemen, Afghanistan and Burundi".

Pakistan ranked 147 in the 2016 World Press Freedom Index. Pakistani journalists are targeted by extremist groups, Islamist organisations and feared intelligence organisations, all of which are on RSF’s list of predators of press freedom.

It said the withdrawal of reporters from these conflict-ridden countries had created "news and information black holes where impunity reigns".

Nine bloggers and eight media workers have also been killed this year.

Reporters Without Borders said the fall in deaths was also the result of the "terror" imposed by what it called "press freedom predators" who close media outlets arbitrarily and gag journalists.

In countries such as Mexico, this led to journalists self-censoring to avoid being murdered, the group said in its annual report.

In Afghanistan, all of the 10 journalists killed were deliberately targeted because of their profession.

Seven, including three women, were killed in a suicide attack in January on a minibus used by privately owned Tolo TV. The Taliban claimed responsibility.

Yemen, where more than 7,000 people have been killed since 2015 in a war pitting Saudi-backed regime forces against Huthi rebels, was another a black spot for journalists with five killed.

"They are clearly being targeted and murdered because they are journalists.

"This alarming situation reflects the glaring failure of the international initiatives aimed at protecting them, and is a death warrant for independent reporting in those areas where all possible means are used to impose censorship and propaganda, especially by fundamentalist groups in the Middle East."

The group called for incoming UN Secretary-General Antonio Guterres to appoint a special representative for the protection of journalists.-APP