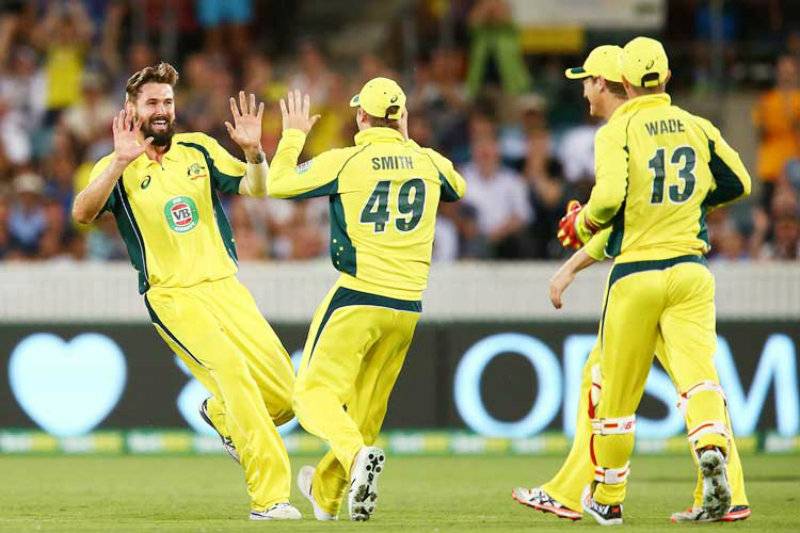 CANBERRA (Web Desk) - A spectacular Indian batting collapse gave Australia a 25-run victory in the one-day international in Canberra on Wednesday, their fourth successive victory in the five-match series.

After winning the toss and choosing to bat, Australian openers Aaron Finch and David Warner both posted big scores to take the home side to a massive 348 for eight.

The Indians looked well on target when Shikhar Dhawan (126) and Virat Kohli (106) put on 212 for the second wicket to reach 277 for one, smashing the attack all over Manuka Oval.

Neither batsman was in any trouble on a lifeless pitch and none of the Australian bowlers were spared. But once Dhawan fell cutting John Hastings to George Bailey at point, the Indian wickets began falling regularly and the Australians began to assert control.

Skipper Mahendra Singh Dhoni fell for a duck before Kohli hit a catch to Australian captain Steve Smith at mid-off, his only false shot in a magnificent 92-ball innings.

With four wickets down and in-form batsman Ajinkya Rahane hampered by split webbing on his hand, the Indians began to panic as they lost Gurkeerat Singh (5), Rahane (2) and Rishi Dhawan (9) in quick succession. The tailenders put up little resistance and Australia took the last nine wickets for just 46 runs to wrap up an unlikely victory.