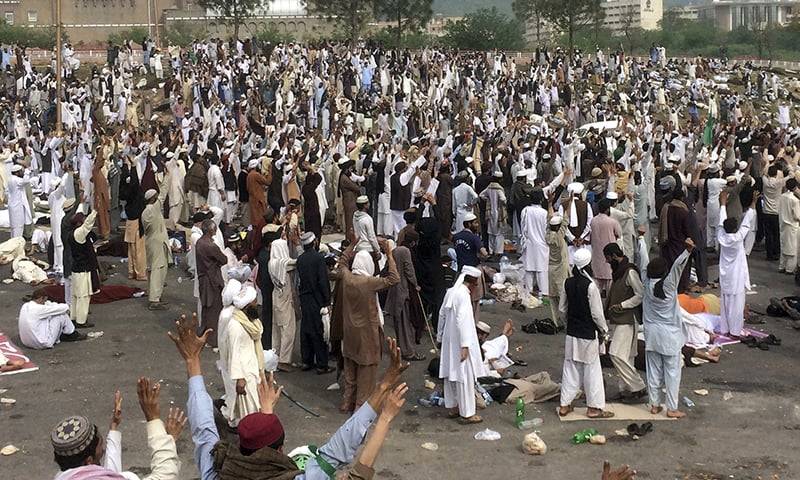 ISLAMABAD - In a bid to bring the ongoing sit-in by religious parties to an end, the government has reportedly extended an offer to send the law minister on leave or change his portfolio.

Media reports suggest the options were put before a representative team of the protesters during a meeting withe 30-member government team, led by Raja Zafarul Haq, here the other day.

However, the proposals could not prove fruitful as leaders of the protesting Tehreek-i-Labbaik Ya Rasool Allah did not accept the options and reiterated its demand of removing Law Minister Zahid Hamid for allegedly amending Khatam e Nabuwwat clause in Election Act 2017.

A deadlock is persisting over the removal of the minister as the government is not ready to surrender before the protesters who have paralysed the capital for over two weeks.

Sources told Dawn News that the protest leaders were also offered to have a meeting with the law minister in order to discuss the issue directly and remove their concerns.

But, the protester denied accepting the offer and said that nothing less than the removal of the minister would be acceptable for them as they have made commitment with their people.

The federal government continued crunch talks with Tehreek-i-Labaik Ya Rasool Allah (TLY) and other radical religious groups and requested the courts to extend a deadline for thousands of protestors to clear two busy highways in Islamabad.

Interior Minister Ahsan Iqbal said on Sunday that all options are available for dispersing the Islamabad protest, adding that a security operation is the last option as the government will try to avoid bloodshed.

Addressing the media alongside State Minister for Religious Affairs Amin Hasnat Shah, Iqbal said the government will go “to any extent” to resolve the issue, including a security operation, adding that protesters blocking the Faizabad Interchange are engaging in a propaganda to incite emotions of the people.

“Our forces have the capability to clear the area but we are keeping the operation as the last option. This is not a sign of weakness but we are doing this out of respect [for the matter of finality of Prophethood].”

The protest has nothing to do with religion or religious demands and “such organisations” take these steps to advance ahead of elections, he said.

“The protesters demand that Law Minister Zahid Hamid should step down; however, there is no proof that he is responsible for the mistake. A committee has been formed in this regard which will probe the matter so there is no justification for the protest,” he said.

In response to a question, the minister said they have intelligence reports that some elements among the protesters want the government to take action so they can further their hidden agenda.

He added that the government is fully capable of countering the protesters but is choosing restraint.

Supporters of Tehreek-i-Labaik Ya Rasool Allah, along with groups like Tehreek-i-Khatm-i-Nabuwwat and the Sunni Tehreek Pakistan, have been blocking the Islamabad Expressway and Murree Road that connect the capital with its only airport and the garrison city of Rawalpindi.

A clash between police and protestors was averted as interior minister Ahsan Iqbal requested the courts to give them more time to disperse, in the hope of an amicable solution.

The government was expected to go into action on Sunday after the Islamabad High Court gave a deadline to the protestors to end their blockage of one of the city’s most important traffic intersections or face government action.

However, a spokesperson for the protest leaders told local media that they had not budged on their demand for removal of law minister Hamid. “The government has shown some flexibility, but we will not end our sit-in unless the law minister is removed from his post,” said Ijaz Ashrafi, the group’s media adviser.

While the government is under pressure to end the siege of the protesters, it is also wary of the consequences of a police action which may result in casualties.

“Already the government has blood on its hands in the Model Town incident where several supporters were killed by the police in a similar action some years back,” recalled political analyst Ayaz Khan, adding, “in these sensitive times, the government does not want a repeat of this situation.”

To diffuse the situation, the government engaged some religious leaders, particularly the Pir of Islamabad’s Golra Sharif shrine for mediation, following which the two sides came to the negotiating table.

On Friday and Saturday, Abbasi received briefings from the interior minister, religious affairs minister Sardar Yousaf and party secretary Raja Zafarul Haq over the standoff between the government and the religious group after the latter refused to accept the order of the High Court to end the sit-in.

The premier is in favour of giving ‘one last try’ before adopting a decisive course of action, reported a local paper. That is why the government functionaries reached out to clerics from different schools of thought to persuade the protestors to end the sit-in, it added.