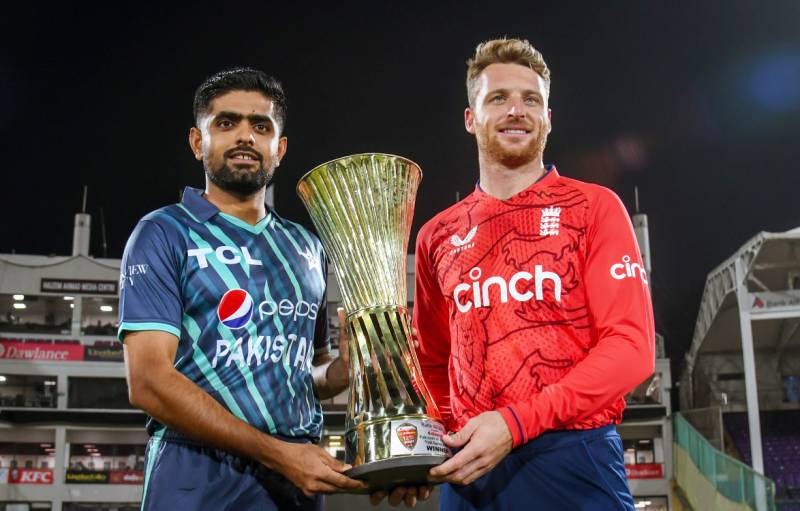 KARACHI – England on Tuesday defeated Pakistan by six wickets in first game of the seven-match T20I series played at the National Stadium in Karachi.

Hales made 53 off 40 balls before he was caught out by Babar Azam on Haris Rauf’s ball while Brooks smashed unbeaten 42 off 25 balls to win the match.

Earlier, England won the toss and opted to field first in the match.

Babar Azam and Rizwan shared good opening partnership of 85 runs before the Pakistani skipper was bowled out by England’s Adil Rashid for 31.

One-down player Haider Ali was dismissed by Sam Curran for 11 runs as he could not stay long with Rizwan on the crease.

Shan Masood’s T20I debut was not impressive as he could score on 7 runs before caught out by Richard Gleeson on Rashid’s ball.

After Rizwan's dismissal, Iftikhar Ahmed kept the scoreboard ticking up as the Team Green build a total of 158 runs.

The T20I series is being dubbed as historic as tourists visited the South Asian country for the first time in 17 years.

The National Stadium Karachi will host the first four matches before the historic series will shift to the cricket headquarters at the Gaddafi Stadium where the remaining three matches will be played, all matches will start at 07:30 pm.

The series will be part of the first leg of England’s tour of Pakistan as they will return after the ICC Men’s T20 World Cup 2022 for three Tests in December this year.

Lately, both teams held practice sessions for the first game, and players from both teams participated in the training.

"Thrilled and excited for this series"

On Monday, the trophy for the T20I series was unveiled at National Stadium. Pakistani captain and star batter Babar Azam and his English counterpart Jos Buttler posed with the trophy in pictures shared by PCB.

Men in Green come into the series after Asia Cup 2022 campaign, where they managed to reach the finals, however, Sri Lanka bagged the final game.

Pakistan will lock horns with England without key pacer Shaheen Shah Afridi and opener Fakhar Zaman as they are both injured, and Shan Masood this time got the opportunity to play for team green.

Meanwhile, the visitors will look to regain momentum ahead of T20 World Cup as they lost all three T20I series they have played in 2022. England will come with newer players including Will Jacks, Phil Salt, and Harry Brook in absence of skipper Jos Buttler.

Experts suggest wicket of the National Stadium in the port city offers a batting-friendly surface while this will be the first T20I that will be held at this stadium since December 2021.

LAHORE – The trophy for the T20I series between Pakistan and England was unveiled at National Stadium in Karachi ...

LAHORE – Pakistan on Thursday named squads for upcoming series against England, the tri-series in New Zealand, ...