The financial impact of Panama Case on Pakistan 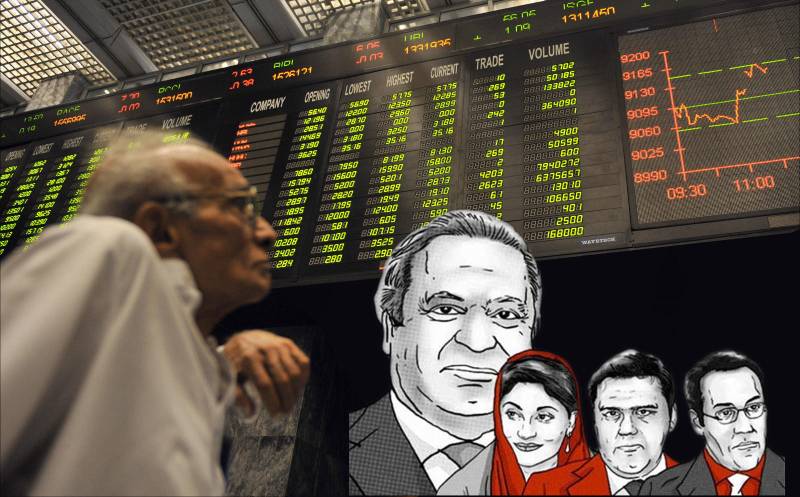 Pakistani equities have been occasionally, but severely, affected by, three major factors, despite mostly being a bottom-up story. These include, but are not limited to:

Of course these all are somehow inter-related. I call Pakistani equities more of a bottom-up story (corporate-driven performance) than a top-down one (macro-driven performance). This is because the listed Pakistani Corporations have been highly resilient and have performed undeterred for many years i.e. corporate earnings growth averaged well over 20% in the last 6-7 years while the RoE has been in the north of 25%, which is dearly missing across many Frontier Markets and Emerging Market economies. Pakistan has performed consistently well despite macros of the country being very bleak amid deteriorating political and law and order situation.

With relatively more political stability and improved law and order situation in the last 3 years or so, Pakistan equity market performed even better with stable corporate performance while the bottom-up phenomenon only became stronger with improvement of macro indicators. Pakistan has seen a historic decline in inflation and interest rates driven by decline in oil prices from mid 2014 onward, as a result, KSE100 has consistently been ranked among the top-10 equity markets in the world by performance - returning 46% in 2017, eventually becoming the top performing market of Asia, ahead of China and India. Not only that, it also became one of the top-10 performing markets in the world!

However, the recent Panama issue severely battered the Pakistan capital market as KSE100 took a nosedive by about 3,300 points, or 7%, from a high of 50,192 points to a low of 46,874 point level, lowest in 2017 to date. The total value of loss was USD 6.7 billion from the highest market capitalization level of over USD 95 billion, to slightly over USD 88 billion. Foreign outflows continued and were USD 160mn in YTD17. This all happened just in the last 3 to 4 months.

This was a much faster decline of the market than the rise witnessed throughout the last year. For instance, last year, market shot up by 46%, or up by USD 25.6 billion in value, which were about 15,000pts (from 35k to around 50k level). If we compare the recent decline in market value per index point, it was USD 2 million per index point decline. Which means that in 2017 the investors who stayed invested lost on average, USD 2 million with every point decline in the index due to the Panama Case. On the other hand, weighing on the same scale, the 2016 rise in investment value was USD 1.7 million per index point increase (USD 25.6 billion added to the overall market capitalization in 2016 with ~15,000 increase in the index).

This shows, last year's entire rally was slower than the decline in the market as a result of this political uncertainty, even though the entire political setup was not being derailed.

Furthermore, total net foreign outflows last year were USD 339 million from the PSX, where per day average outflow clocked in at USD 1.4 million (partially due to various other reasons, including Fed raising interest rates and Pakistan being upgraded back into the Emerging Markets Index, so Frontier Markets funds have been gradually shifting). However, on the other hand, due to the Panama uncertainty, foreign outflows intensified with total net foreign outflows standing at USD 190 million in 2017TD, where per day average outflows came around USD 2.4 million, versus USD 1.4 million recorded last year - an outflow of a million more in 2017 due to the added political uncertainty on account of the Panama case!

However, the silver lining, or the saving grace to such massive foreign outflows from the PSX was equity mutual funds, and to some extent Insurance companies who have been receiving flush of liquidity from all around, thanks to reduced interest rates, newly-implemented taxes and ineffective amnesty to the Real Estate sector that rendered it almost dead on the deal front (which is a huge cash market with no other avenues but equities), along with tighter controls on illegal flow of funds both domestically and even tighter curbs globally, in addition to information treaties being signed (with UAE and other tax-heavens). These factors, in addition to some others, consolidated the liquidity for equities.

This was possible as equity mutual funds' Assets Under Management (AUMs) were up about PKR 50 billion (USD 475 million) in the last 13 months (from Dec-15 end to Jan-17, as per Mufap's report) recording a gigantic growth of 44%, while total MF industry's AUMs grew by 37% to PKR 613 billion (US$ 5.8 billion), of which equity funds' total AUMs stood at PKR 166 billion (US$ 1.58 billion), contributing 27% to the total MF industry AUMs during the last 13 months. This raised equity mutual funds' ability to absorb massive foreign outflows to date. Even right after the SC verdict on Panama case, the market touched its historic intra-day high of over 1,900pts where foreign investors were the net sellers, mutual funds bought about USD 46 million worth of share in the last 2 days.

Despite the fact that Panama case hangs in the balance for another 60 days, Pakistan equities' fundamentals stand firm. The upcoming triggers like MSCI Emerging Market upgrade for Pakistan in May-17, USD 300-400mn foreign inflows from tracking foreign funds from Jun-17 onwards, Federal Budget which is to be announced by end May-17 with expected reliefs on bonus and other taxes with more development-driven populist allocations (this being a pre-election budget), and on-going development hype owing to the CPEC, should keep Pakistan equities in the limelight.

Pakistan equities' valuations are also undemanding with KSE100 PE/DY trading about 35%/50% discount to its EM peers. So, those who believe in fundamentals should stay invested and give no heed to short-term volatility.

The author is an avid finance professional. He is the Chief Commercial Officer at JS Global Capital, Member Board, Privatisation Comission and Member EC, Board of Investment

‘Naya Pakistan’: How would the economy get going?