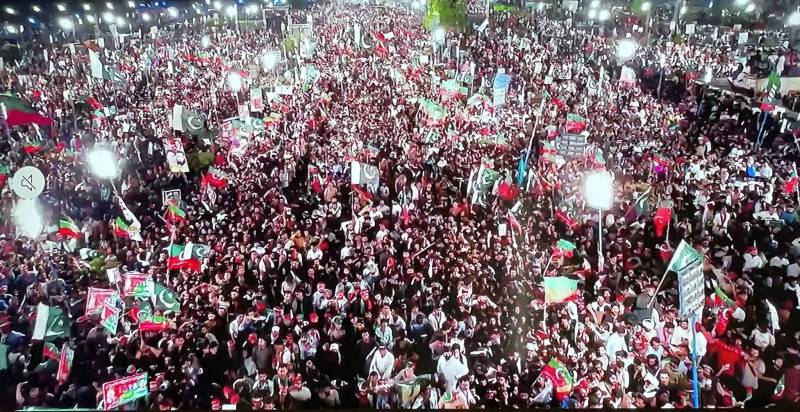 LAHORE – Former prime minister Imran Khan said on Thursday he would not accept the government of the corrupt at any cost and demanded fresh general elections on an urgent basis.

He said that three stooges – Shehbaz Sharif, Asif Ali Zardari and Fazl-ur-Rehman – became part of the foreign sponsored conspiracy and toppled his government. He said he went to Russia so that he could buy cheap gas and wheat for the people of Pakistan. He said that India defied the US pressure and purchased cheap oil from Russia in defiance of the US pressure.

Referring to the allegations that he sold the gifts he received from different countries, Khan said he got gifts from the government's depository in accordance with the law, but spent that money on construction of roads around his private residence instead of taking funds from the exchequer.

Khan said the United States carried out 400 drone strikes in Pakistan, but former prime minister Nawaz Sharif and other leaders did not say even a single word against these drone attacks.

He asked the judiciary who's duty it was to arrest these corrupt people. He said that those who should have been in jail have become prime minister, chief minister and ministers. He said these rulers were involved in money-laundering.

Khan said that Pakistan's justice system could not hold the powerful accountable. Referring to the foreign funding case against the PTI, Khan said his party received funds from Pakistanis in the country and abroad and there was nothing wrong about this funding.

Towards the end of his speech, Khan said he wanted general elections in the country without any delay. He said those who made a mistake by toppling his government had only one way of correcting that mistake; they should announce fresh elections immediately.