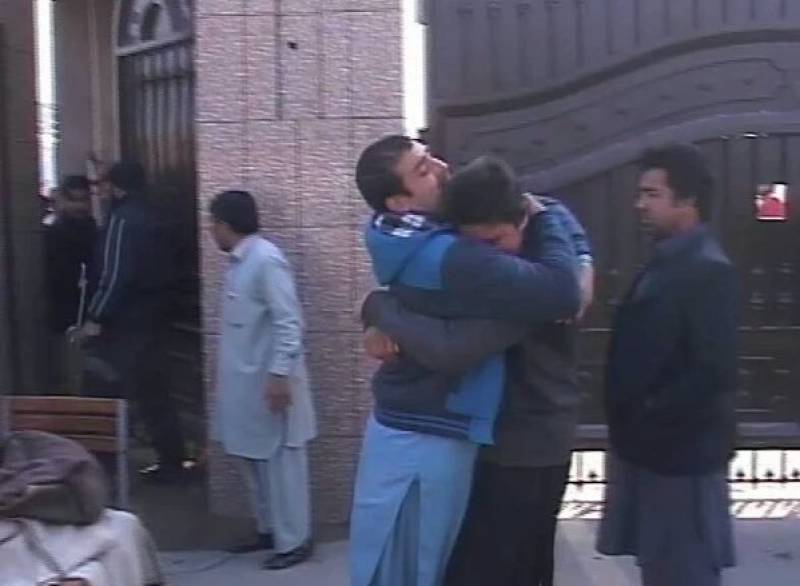 On the occasion the grieving  families of Wednesday's martyrs and injured were presented with flowers and cards which carried messages of peace and love.

Talking to newsmen, one of the visitors said if government and law enforcement agencies would have treated the attackers of APS with iron fist the yesterday's attack would not have been possible. He once again demanded government to bring all those responsible of 2014 terrorist attack to justice.

He urged political and military leadership to intensify the fight against terrorism and take measurements to avoid such incidents.

Meanwhile a day of mourning is also being observed throughout the country to express solidarity with the victims of Bacha Khan University, Charsadda terror attack.

The national flag is flying at half mast on all the government buildings while special prayers are also being held in the educational institutions for the martyrs.

Earlier on Wednesday, a group of heavily-armed terrorists stormed Bacha Khan University in Charsadda, killing at least 21 people and wounding dozens as the army hunted for any gunmen all day.

Four of the attackers have been neutralised by Pakistan army, security officials told Daily Pakistan Global.

Rescuers said 21 bodies had been recovered including students, guards, policemen and at least one teacher, named by media as chemistry professor Syed Hamid Husain.

There are reports that fifty severely injured people were admitted to district headquarter hospital, around a dozen of them is still under treatment at the hospital. Four security guards and a professor were also among the injured.

Meanwhile the National Database and Registration Authority (NADRA) has submitted a complete identification report of the finger prints of the terrorists involved in the Bacha Khan University attack to the Interior Minister.

Interior Minister Chaudhry Nisar directed the authorities concerned to share the information with all intelligence agencies and security forces for further action against the terrorists.

Talking to a press conference on late Wednesday, Pakistan army spokesman Lt-General Asim Saleem Bajwa said major breakthroughs had been made in identifying the terrorists who attacked the Bacha Khan University in Charsadda, adding that the terrorists’ phone calls had been traced and analysed, and that two cell phones had also been recovered from them.