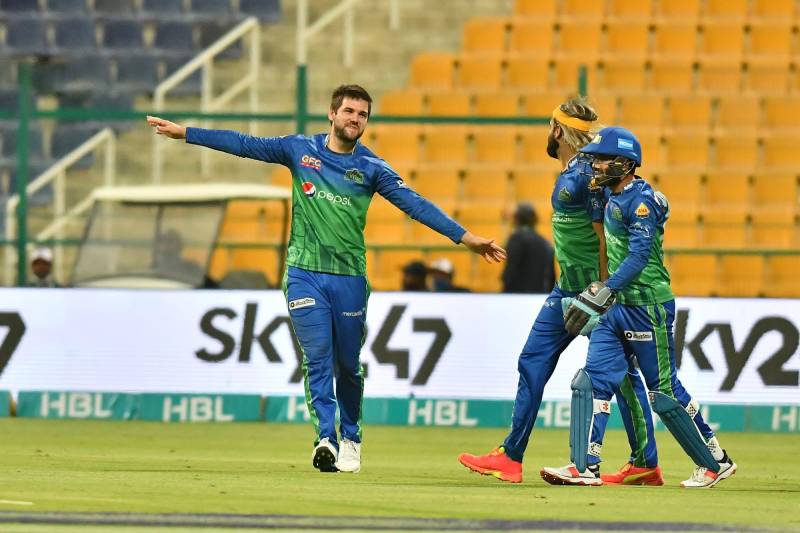 ABU DHABI – Multan Sultans beat Islamabad United by 31 runs and made their way to the finals of the sixth edition of the Pakistan Super League (PSL).

Earlier, the Sultans won the toss and decided to bat first. They set a 181-run target for the United at the Sheikh Zayed Cricket Stadium in Dubai. The defeat for the Shadab Khan-led side means they will either face Karachi Kings or Peshawar Zalmi in the Eliminator 2.

The winner of Eliminator 1, which will take place later in the day, will face United in Eliminator 2.

Sohail Tanvir got an early breakthrough for the Sultans. He bowled Colin Munro in the second bowl of the first over for zero.

Imran Khan Sr's direct hit at nonstriker's end dismissed Muhammad Akhlaq (10) as he struggled to get across the pitch.

Tanvir capitalised on the pressure the team had put on the United in the fifth ball of the same over, as he got the wicket of skipper Shadab Khan (0), with a nice catch by Shan Masood at the cover drive.

In the ninth over, Blessings Muzarabani sent Iftikhar Ahmed (16) back to the pavilion after chipping the ball to Sultans wicketkeeper and captain Mohammad Rizwan — breaking an important 40-run partnership between Ahmed and Usman Khawaja.

In the 10th over, Mohammad Rizwan stumped Asif Ali (1) as he looked to flick a slow bowl by Imran Tahir.

Khawaja – after Hussain Talat handed him the strike in the 14th over of Blessings Muzarabani – smacked 18 runs to bring back his team in the game.

Tanvir – the experienced bowler who Sultans bring in when they are hot waters – turned United's hopes dim in the 15th over as he dismissed Khawaja for 70.

Veteran spinner Tahir struck again in the 16th over, as he dismissed Hasan Ali (10) with an impressive catch by Rilee Rossouw at long-off, while in the 18th over Mohammad Wasim (13) fell lbw.

In the 19th over, Muzarabani dismissed all-rounders Faheem Ashraf (0) and Hussain Talat (25) to take his team to the finals of the tournament.

We have done it !

Thanks to all your love, support and prayers! 🙏❤️🙌🏽#Sultans win it by 31 runs and reach the Final #IUvMS #SultanAaGayya #Sultans pic.twitter.com/JbeVnUmLUn

Multan Sultans have handed a 181-run target for Islamabad United.

Akif Javed got the first and important wicket of Mohammad Rizwan in the second over after he made an appeal for caught behind. The Sultans' skipper could not get the bat on it.

United's skipper Shadab Khan was able to break the partnership of Sohaib Maqsood (59) and Shan Masood (25) after the latter fell lbw, courtesy a good length ball turning in from outside off.

Two bowls after sending Masood back to the pavilion, Shadab was able to dismiss an important batsman of the Sultans, Rilee Rossouw, for a duck.

However, after the quick dismissals, Jhonson Charles (41) and Maqsood were able to build a 40-run partnership to help their team bounce back in the match.

Maqsood hit a half-century in the 13th over of the match, with six fours and three sixes.

In the 15th over, Charles muscled a straight shot to deep midwicket, but Iftikhar Ahmed took a good catch — getting Faheem Ashraf his first wicket.

Ashraf, in the 17th over, took the much-needed wicket of Maqsood, dismissing him for 59, thanks to a catch by Akif Javed.

To keep, the Sultans' hopes alive, Khushdil Shah (42) hit some impressive shots — five sixes — in the last overs to put up a competitive score for the United.