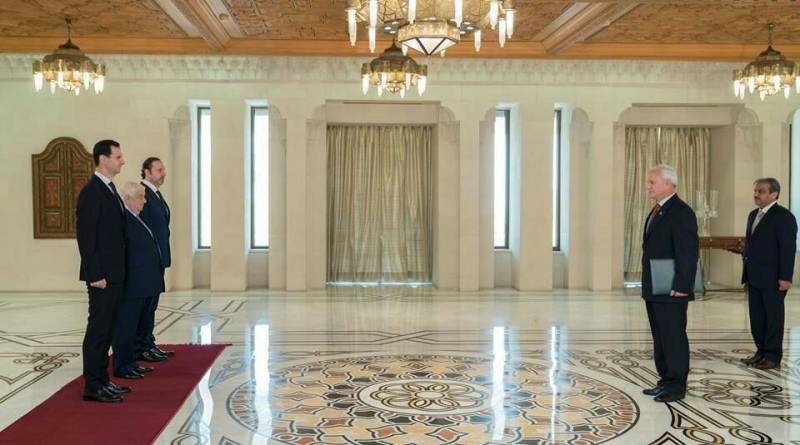 The Syrian president exchanged talks with the ambassador and wished him success in his missions.

The ambassador was received and seen off at al-Shaab Palace in the usual ceremonies.

The two Islamic nations share the historic, international, and bilateral relations. Through the ancient civilization exchange, areas of modern Pakistan were part of the silk route with the Syria and for centuries, Syrian Islamic missionaries that introduced Islam in the parts of now integrated in Pakistan after 711 AD were from Syria.

Along with Russia and Iran, Pakistan has raised its voice for the support for President Bashar al-Assad, and greatly exhorted for peaceful solution of Syrian crises as well as opposing any military actions against Syria, but recently has reduced their supports for Bashar al-Assad in favor for Turkish military intervention against al-Assad's regime, as Pakistan and Turkey are close allies as well, while Turkey has traditionally hostile to Assad's Government.

ISLAMABAD - Pakistan is following the situation in Syria with grave concern and has called all sides to refrain from ...

After the Syrian military’s alleged use of chemical weapons in 2013, Pakistan strongly opposed a potential US-led military intervention in Syria to remove Assad. The Pakistani government argued that Assad’s fall would make Syria a terminal failed state. Pakistan’s emphasis on maintaining the status quo in Syria has strengthened its relationships with Russia and China, the leaders of the pro-Assad bloc in the United Nations (UN).

Pakistan has also criticized international sanctions against the Syrian government. The Syrian economy’s collapse has disrupted trade links between Damascus and Islamabad. Before the Syrian civil war’s outbreak, Pakistan regularly sold large quantities of wheat and cotton to Syria in exchange for subsidized Syrian crude oil. Pakistan hopes to revive these economic deals by ensuring that a negotiated solution to end the Syrian conflict is implemented on Assad’s terms.